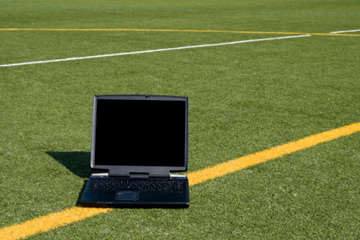 Sports fans, it's time to face facts -- you owe a lot to the nerds of the world. Because of the geeks, you have more ways to watch your favorite events than ever before. There are dozens of different apps and services that let you catch the next game on your television, smartphone, computer, tablet or video game console.

Perhaps the biggest benefit to this technological approach is accessibility. Many services and apps give you access to games you might not be able to see otherwise. As every sports fan knows, not every game or match is available in every region. But with the right streaming services, you're able to watch many games even if they're nowhere to be found on TV in your area.

And since there are many streaming services that let you watch sports events on mobile devices, you can watch a game even when you're nowhere near your television, entertainment center, man cave or faithfully constructed replica of Wrigley Field. The only components you need are the right broadband Internet connection, a device capable of running the service or app and access to the app itself.

There are a couple of caveats to keep in mind. One is that not every sports organization supports live streaming yet. Digital streaming is still a young broadcast model and not everyone is comfortable with it. In some cases, you may only be able to access certain content on specific devices. An iPhone owner may be able to see some content an Android handset owner can't access, and vice versa.

The second big warning is that there are some sites online that stream video from sports events without permission. These sites violate the rights of the sports organizations. While you might not get in trouble for watching the content, may feed digital piracy concerns among sports organizations that are already hesitant to adopt digital broadcast models. In fact, the desire to address digital rights issues may cause these organizations to move toward a streaming model more slowly. Playing by the rules gives everyone a better chance at accessing content in a legitimate way.

Next, we'll look at how to use these services and apps.

For example, in the United States, you can access National Football League (NFL) games on Verizon mobile devices using NFL Mobile. This app allows you to watch live NFL coverage as well as access other features. While there are other apps for mobile devices that integrate with the NFL, they don't include the live video feature you'll find in Verizon's app.

Other sports organizations take a different approach. Major League Baseball (MLB) offers an app for devices running iOS, Android, Windows Phone 7, BlackBerry and even WebOS operating systems. When paired with an MLB.tv subscription, this app allows fans to watch out-of-market games. There's a fee for the app (which decreases as the season wears on) and you still must subscribe to the MLB.tv service to be able to watch the games.

Not all the streaming video you'll find online is live. During the 2008 Summer Olympics and 2010 Winter Olympics, NBC Universal delayed some streaming video feeds in order to save the events for prime-time television broadcast. While you might have been able to watch minor events live on the Internet, some of the high-profile events were inaccessible until much later. In 2011, NBC sports executive Mark Lazarus said that every event in the 2012 Summer Olympics would be broadcast live on one platform or another. Some events may remain exclusive to television broadcast [source: Zaccardi].

If you're a true sports fanatic, subscribing to every service and purchasing every app might be a bit expensive. But these are still the early days of digital transmission of live video content. As some methods show promise and others falter, we'll likely see a more standardized approach in the years to come. And at the end of the day, it's hard to argue with the countless hours of sports footage we have access to, thanks to a bunch of computer nerds. Remember, sports fans, to tip your cap the next time you see a computer scientist!

Learn more about sports and streaming video by following the links on the next page.

If you're away from home and you want to watch sports that you could normally access on your home television, a Slingbox might be for you. Just connect a Slingbox to your entertainment center, and you can stream TV content over a network connection to the Internet. As long as you have an Internet connection and a device running the Slingbox app, you'll be able to watch your home TV on the road.