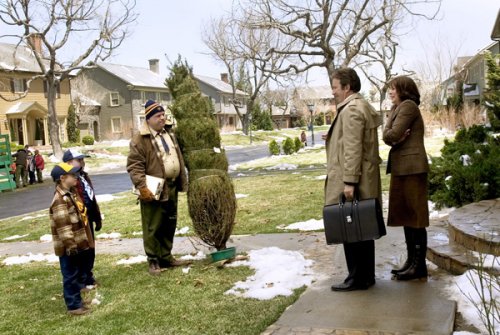 The snow-covered, typically Midwestern street inhabited by Tim Allen, Jamie Lee Curtis, and Dan Aykroyd in the movie "Christmas With the Kranks" is actually located a couple thousand miles to the west of Illinois, but can't be found on a Hollywood back lot.

After scouring "every outlying neighborhood in Chicago" to no avail and rejecting existing studio facilities as unsuitable, production designer Garreth Stover convinced producer Charles Newirth and director Joe Roth to build the entire neighborhood from scratch. The movie's crew erected 17 houses, including the featured five belonging to the main families in the story, on a parking lot in Downey, California.

We talked to the movie's creators to see how they did it. Read on to get the story.