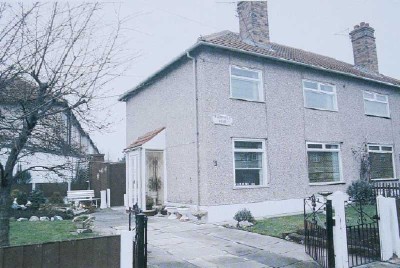 Richard Buskin 1 Blomfield Road, the Liverpool house that Julia Lennon shared with her boyfriend. It was here that John was informed by a policeman that his mother had been killed.

Just about the only family members giving their full support to John Lennon, Paul McCartney and George Harrison's musical activities in their teenage years were George's parents and the ever-helpful Julia Lennon, John's biological mother. John was still spending a lot of his free time with his mother, getting the kind of encouragement from her that his Aunt Mimi Smith, who raised him, would refuse to give.

Then, on the evening of July 15, 1958, disaster struck. Having spent the day at her sister's house, Julia waved goodbye and began to cross the road in order to catch the bus home. She never made it. She was hit by a car being driven by an off-duty policeman and died instantly, aged 44.

John was sitting with Julia's boyfriend, waiting for her to return, when a policeman knocked on the door. "It was just like it's supposed to be, the way it is in the films," he told biographer Hunter Davies a decade later. "Asking if I was her son, and all that. Then he told us, and we both went white.

"It was the worst thing that ever happened to me. We'd caught up so much, me and Julia, in just a few years. We could communicate. We got on. She was great. I thought ... I've no responsibilities to anyone now."

Indeed, it was with this kind of attitude that John became more rebellious than ever, and turned to drink in order to blank out the pain of living in the real world. At the same time, his friends began to notice his humor sometimes taking on an even stranger edge.

According to Hunter Davies's The Beatles, college girlfriend Thelma Pickles remembered that, "[John] used to do a lot of cruel drawings. The day the Pope died, he did lots of drawings of him looking really awful. He did one of the Pope standing outside some big pillars outside Heaven, shaking the gates and trying to get in. Underneath it said, 'But I'm the Pope, I tell you!' "

A friend of John, Nigel Whalley, was the last person to see Julia Lennon alive, saying a few words to her on his way to Mimi's house, before walking on, hearing the screech of brakes, and turning to see a body flying through the air. In an interview, which he gave several years later, Whalley recalled an evening not long after the accident when John invited him and a few other friends to Julia's old house.

"A number of us went, and we all sat down round a circular table. John said we were going to hold a séance, switched the lights down low and spread the letter cards round the table. Then he began to rotate his hand round the top of a tumbler, and it started to move and spell out words. We sat there terrified, but he seemed quite calm, almost unmoved, and to this day I don't know whether there was a spirit there that night or if he was just having us on."

Either way, John would never quite get over the emotional stress caused by losing his mother. "I lost her twice," he asserted just before his own death. "Once as a five-year-old when I was moved in with my auntie. And once again ... when she actually, physically died. ... And that was really a hard time for me. It just absolutely made me very, very bitter. The underlying chip on my shoulder that I had as a youth got really big then. Being a teenager and a rock 'n' roller and an art student and my mother being killed, just when I was re-establishing a relationship with her ... it was very traumatic for me."

"Devastating" would be another way of putting it. Having been deserted by his father and then forced to suffer the loss of his uncle, John had now been deprived of his mother, the one person who really seemed to understand him. Hurt and full of rage, he desperately needed someone to turn to, someone who could understand his inner torment, tolerate his moods, and always be there for him. That person turned out to be Cynthia Powell.