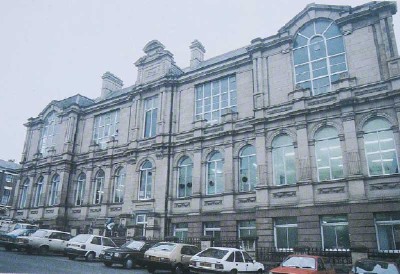 ©
Liverpool College of Art, where John spent most of his time either disrupting classes or rehearsing with his band -- when he bothered to show up at all.

Approaching his 17th birthday, John Lennon had, until now, led a fairly conventional existence. Yes, his very early life had been rocky, but since the age of five he had been brought up in an atmosphere of love and stability, and the joys and setbacks he had experienced were not really unusual.

Now, however, John was about to embark on a life-long journey that would take in an incredible number of landmark events. Prior to the end of his time at Quarry Bank Grammar School (the English equivalent of a high school) nothing remarkable had happened to him, but after his departure for Art College it was as if everything intensified and accelerated. Over the next 23 years, incidents of great significance would pile one on top of the other, and there would be a constant flow of people passing through his life; enough, indeed, to fill several lifetimes.

Yet all of this would have sounded totally ridiculous, both to John and to everyone who knew him, when he turned up for his interview at Liverpool College of Art in the fall of 1957. Wearing his Uncle George Smith's old brown jacket, plus shirt and tie, with an eye-catching portfolio of his Quarry Bank work under his arm and Aunt Mimi Smith in tow, he gained entry and took what appeared to be his last chance for a secure future.

His school days having been a complete write-off, he was lucky to get this opportunity. Now, he had better do some work, otherwise ... well, Mimi shuddered to think.

The College was situated in Liverpool's bohemian neighborhood near the city center, an area populated by sculptors, painters, writers, and poets. In line with this, the students were typical arty types; young intellectuals, whose favorite music was the traditional ("trad") jazz that they listened to at local cellar clubs such as The Cavern. Smooth in appearance as well as mannerisms, their typical dress would be casual coats, chunky sweaters, and suede shoes.

This was not, however, the reaction of Bill Harry, an ambitious, down-to-earth Liverpudlian who had enrolled at the college a year before. Always drawn to originality, both in life as well as in art, Bill felt that he had little in common with his conventional fellow students, and so when he first noticed John sitting in the canteen -- he could hardly miss him -- he regarded him as a welcome change.

"You have to remember that in those days things were very, very strict," says Bill, "not only in the way that people looked but also in terms of their behavior. They had more respect for their 'superiors,' they did what they were told, they conformed a hell of a lot more. Rock 'n' roll would bring a lot of freedom to young people, but it hadn't done so yet; there wasn't really a rock culture or, for that matter, a youth culture. So word about John soon spread around the college.

"I was already writing for music magazines, and so being heavily into writing, reading and other forms of art, I tended to seek out creative people who I thought I could get on with. After I saw John we soon started talking, and we'd go for drinks at Ye Cracke [a pub near the college] and to friends' places in the evenings."

Against the wishes of his instructors, John developed his penchant for drawing misshapen, satirical figures.

So far, so good. But while he had been looking forward to the opportunity to concentrate on the kind of drawing that he enjoyed doing, and to express himself with the paintbrush, John soon found out that he would instead be attending classes dealing in geometry, architecture, object drawing, and lettering. This was just like being at school!

To make matters worse, he had to put up with strict, narrow-minded instructors who clearly didn't have a clue what he was about, and a bunch of stuck-up college kids who got on his nerves. His response, as usual, was swift.

Determined to ignore the established rules and regulations, he decided to enjoy himself in his own sweet way -- disrupting the classes when he bothered to attend, and drinking with new friends such as Geoff Mohammed and Tony Carricker, when he chose to go absent. In no time at all, John had managed to land himself with the same dubious reputation that he had earned at Quarry Bank.

Imagine the scene: For the weekly "life" class, 15 students would be quietly standing behind their easels in Room 71, sketching the body of 27-year-old nude model June Furlong. Having walked around and passed comment on the various illustrations, the teacher would then leave for a while, at which point John would let out a little snigger from the back of the room. Nobody would take any notice of this, but shortly afterwards he would make a similar but slightly louder noise.

Again, everyone would try to get on with his or her work, and a minute or so would pass before the serious mood would be interrupted by another, more exaggerated giggle, followed shortly thereafter by John's full-scale hysterical shriek. By now, everybody, including the naked model, would be convulsed with laughter, and John would then follow this up by jumping into her lap and necking with her.

The offbeat side of John's nature also became apparent at the end of another life class session, when the afternoon's work was handed in. Whereas the other students had produced straightforward drawings of June, the portrait that John came up with was of the only item that she was wearing; her wristwatch. Highly original, but it didn't amuse the teacher.

Soon, relations between John and his instructors had deteriorated to such an extent that he actively went out of his way to annoy them. Mimi recalled waking up at 3 o'clock one morning and going downstairs to see him painting furiously, preparing work that had to be handed in within a few hours.

She sat there in the living room, watching him finish his masterpiece and then smother it with salt, pepper, and sugar that he had fetched from the kitchen. Writer George Tremlett's The John Lennon Story reports what happened next:

"What on earth are you doing?" Mimi demanded. "You'll get thrown out of college."

"Look," said John, referring to one of the teachers, "he hates me, and I'm not very fond of him!"

Mimi couldn't believe this act of willful provocation, and when he was about to leave for class, she and John engaged in a tug-of-war over the painting in the driveway. No need to say who won, except that the nephew returned later that day, smiling triumphantly. "He never said a thing," commented John about the lecturer. "He just looked at it and walked away, but he knew why I had done it, all right. He knew!"

Meanwhile, with matters running less than smoothly at college, John's musical ambitions weren't exactly going to plan, either. After recruiting the services of Paul McCartney, the Quarry Men -- Lennon's first band -- had managed to play at various small clubs around Liverpool during the last few months of 1957 and the first part of 1958. Then the bookings dried up, and for several months the group was reduced to playing at private parties. Some of the band members lost interest and quit, but by this time 15-year-old George Harrison had joined the line-up.

Richard Buskin Ye Cracke, a pub located around the corner from the Art College; John and his cronies frequently held court here.

In John's eyes George was just a kid, but the way that he played tunes like "Raunchy" and "Guitar Boogie" was certainly impressive, and besides, his mother was an easygoing woman who allowed the group to practice in the Harrison home. With benefits such as these to offer, George was in. John had, unwittingly, put together the nucleus of the Beatles.

George was, in fact, a schoolmate of Paul's, attending the Liverpool Institute with him. By happy coincidence, this school was situated immediately next door to the Liverpool College of Art, and so most lunchtimes Lennon, McCartney, and Harrison would get together for a practice session in either the canteen or Room 21 of the college, entertaining the students with renditions of songs by the likes of Little Richard, Buddy Holly and the Everly Brothers.