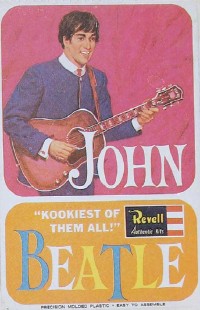 John Lennon won back Yoko Ono's love with a song from his Beatle days.

For all the heartache of his separation from Yoko Ono in the early 1970s, one thing that never deserted John Lennon was his tremendous sense of humor. Throughout his life, this attribute helped him cope with even the most difficult situations. He had ample opportunity to display his wit during the promotion of the Walls and Bridges album, when he made live broadcasts on a number of radio stations.

One such occasion was his appearance on New York's WNEW-FM, when he sat in on Dennis Elsas's afternoon show on Saturday, September 28, 1974. Introducing himself to the listeners as "Dr. Winston O'Boogie," John was clearly in top form as he spoke to Elsas about his career past and present, and announced some of the commercials:

Then there were the weather forecasts: "We're not going to bother with the weather, just look out of the window! Oh, you want the weather? The degrees have changed. ... Oh, this is a nice degree: The temperature is 69! ... The weather in Central Park is still there. ... Tomorrow will be just the same as today, only different," and on and on!

John's love of double meaning -- both sexual and otherwise -- came in handy the following week, when he turned up as a guest deejay on the breakfast show of KHJ radio in Los Angeles. This time around he was able to spin many of his favorite records, field live phone-in questions from fans, and read commercials in mock accents suggestive of a variety of nationalities and sexual orientations. Not surprisingly, the station's ratings climbed to a new high, while the advertisers were happy to reach more listeners than they had paid for.

On an equally upbeat note, the two hit singles from Walls and Bridges were both bright, cheery numbers: the fantasy-like "#9 Dream" and the catchy "Whatever Gets You Thru the Night," which featured Elton John on keyboards and harmony vocal.

John returned the compliment by playing and singing on Elton's cover versions of "Lucy In The Sky With Diamonds" and "One Day (At A Time)." Almost as a joke, Elton asked John if he would join him on stage in the event that "Whatever Gets You Thru the Night" topped the American charts. John, who hadn't yet had a solo #1 single in the States and didn't imagine he was about to get one, casually agreed.

He was totally amazed, therefore, when the song hit the top of the Billboard charts on November 16, but on the 28th he kept his promise when he fought back an attack of nerves and walked on stage at New York's Madison Square Garden during Elton's Thanksgiving Day concert there.

The crowd, which had heard rumors about a possible appearance by the ex-Beatle, nearly raised the roof when he strode out sporting long center-parted hair, a black cape, and dark, round glasses. The excitement continued as the two stars launched into full-blooded versions of the songs they had recently recorded together.

John then stepped up to the mike and announced, "I'd like to thank Elton and the boys for having me on tonight. We tried to think of a number to finish off with, so that I could get out of here and be sick. ... And we thought we'd do a number of an old estranged fiancé of mine called Paul. This is one I never sang, it's an old Beatle number, and we just about know it."

The song was "I Saw Her Standing There," and the first chords were all the cue the fans needed to go absolutely wild. Sitting among them that night was Yoko; accounts differ as to whether John did or didn't know she was there. Either way, when they met backstage afterwards, the moment was nearly as intense as when they first made eye contact back at the Indica Gallery in 1966.

The reconciliation had happened at last and by January 1975 they were living together once more. As John commented in a French television interview a few months later, "Our separation was a failure."

Hereafter, he would refer to the period spent apart from Yoko as his "Lost Weekend." (In actual fact, it had lasted about 15 months.) Having turned the final page of yet another chapter in his life, John was once again prepared to put the past behind him and start anew.