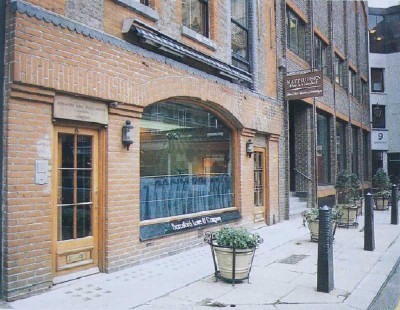 ©
6 Mason’s Yard, in the center of London, the former site of the Indica Gallery, where John Lennon and Yoko Ono first met on November 9, 1966.

When John Lennon visited the Indica Gallery in Central London on November 9, 1966, in order to attend a private preview of an exhibition Unfinished Paintings and Objects, it wasn't purely due to artistic interest.

What John saw on his arrival hardly turned him on, however. The Japanese-American woman was certainly there, but instead of being inside a bag she was just walking around, arranging some of the objects that would form part of her display the following day. It was to be an avant-garde exhibition, dealing with progressive, decidedly offbeat art. John soon found himself gazing in astonishment at some of the items: A fresh apple on a stand, priced at £200 (at that time, $480), and a bag of nails, a bargain at just £100 ($240)!

After being introduced to "the millionaire Beatle," the woman handed him a little card that said simply, "Breathe." John, although puzzled, responded politely with a quick pant. Next, his eyes settled on a ladder leading up to a canvas suspended from the ceiling, with a spyglass hanging from it on the end of a chain. Climbing to the top of the ladder, he looked through the spyglass to read a word printed in tiny letters.

"You're on this ladder -- you feel like a fool, you could fall any minute -- and you look through it and it just says 'YES,' " he told David Sheff in 1980. "Well, all the so-called avant-garde art at the time, and everything that was supposedly interesting, was all negative; this smash-the-piano-with-a-hammer, break-the-sculpture, boring, negative crap. It was all anti-, anti-, anti-. Anti-art, anti-establishment. And just that 'YES' made me stay in a gallery full of apples and nails, instead of just walking out saying, 'I'm not gonna buy any of this crap.'"

The humor in the work, while downright strange to many people, was of a kind that appealed to John's sense of the absurd, and his interest was now taken. Nearby was an object called "Hammer and Nail," consisting of a board with a chain and a hammer hanging on the end, and a bunch of nails positioned underneath. Could he hammer one of the nails in? "No," was the initial reply. Tut, tut! The gallery owner pointed out to the artist that this was no way to treat a Beatle. Besides, with all his money, John might buy the piece!

John told Sheff in 1980, "So there was this little conference and she finally said, 'Okay, you can hammer a nail in for five shillings [60 cents].' So smart-ass here says, 'Well, I'll give you an imaginary five shillings and hammer an imaginary nail in.' And that's when we really met. That's when we locked eyes, and she got it and I got it, and that was it."

The woman was, of course, Yoko Ono. Seven years older than John and then in the middle of her second marriage, she had turned her back on her middle-class background, and created quite a name for herself with the New York avant-garde set. Now she was attempting to cause a similar stir in London. She would set about her task by, among other things, covering one of the lion statues in Trafalgar Square in huge white sheets, and filming a feature-length movie focusing solely on 365 naked bottoms.