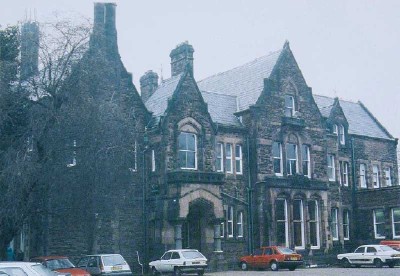 ©Richard Buskin Quarry Bank Grammar School, where John Lennon made mischief between 1952 and 1957.

Pete Shotton, John Lennon's childhood friend, recollects an incident early on during their time at Quarry Bank Grammar School, when he and John were ordered to report to the Deputy Head as punishment for one of their crimes. Most kids in this kind of situation either just apologize or plead their innocence, but of course Master Lennon had to go one better.

The teacher -- who was sitting between the two boys -- happened to be bald, and so John happily accepted the chance to perform one of his favorite tricks: tickling the man's head whenever he looked the other way. As usual, the victim tried to swat the imaginary fly and as usual John's sleight of hand left his victim totally confused and irritated.

"I couldn't breathe, what with the laughing," Pete recalls. "It would get so that my muscles wouldn't work, I was straining my stomach so much." John showed his own amusement by quite literally wetting himself, there and then, on the spot.

"What the devil is that?" inquired the teacher, hearing a dripping noise and seeing a small puddle on the floor.

"I think the roof's leaking, sir," was John's immediate reply. Never mind the fact that it wasn't even raining!

On another occasion, the demonic duo was sent to the headmaster to be caned. While Shotton waited his turn outside the office, John went in to receive his punishment, and when he came out he was crawling on all fours, groaning. On seeing this, Pete once again couldn't control his laughter, and as a result got an even worse beating.

Canings, in fact, became part of John's staple diet, as the boy set about bullying the teachers, abandoning any form of class work, and allowing himself to slip from a strong position in the top-ranked A-stream class during the first year, to 20th in the C-stream -- bottom of the bottom class -- by the final term of his graduation year. Teacher Eric Oldman remarked to Lennon biographer Ray Coleman that, on John's part, "There was a simple lack of any wish to get on."

For John, indeed, academic success was irrelevant, since much of the subject matter and the method of teaching it were alien to his way of thinking. Rather than flow with the tide, he preferred to confront it head-on; at least that way he would gain some pleasure out of the whole experience, as well as local notoriety.

"People like me are aware of their so-called genius at ten, eight, nine," he remarked to Jann Wenner during a 1970 Rolling Stone interview. "I always wondered, 'why has nobody discovered me?' ... didn't they see that I'm cleverer than anybody in this school? That the teachers are stupid, too? That all they had was information that I didn't need. ... I was different. I was always different. Why didn't anybody notice me?"

"He had a magnetism which attracted everybody," adds Shotton. "Everyone was interested in John, because even as a kid he had a great awareness about everything going on about him. He had an amazingly quick wit, a great sense of humor, an ability to turn serious situations upside down on their head and transform them into surrealistic plays. So in school and out of school people always wanted to be in his company, because he brightened everything up."