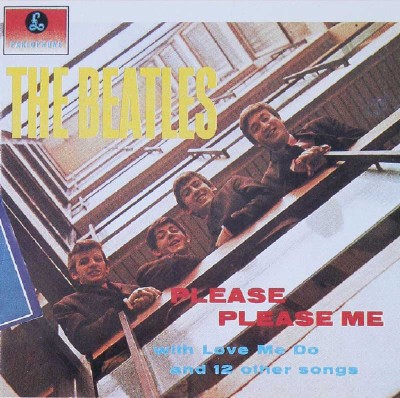 The photo used on the sleeve of the Beatles’ first album was shot at the London headquarters of EMI Records.

The John Lennon who rose to fame in Britain as the "leader" of the Beatles in 1963 was very different from the character familiar to those who knew him in and around Liverpool. Instead of the rough-looking, tough-talking, rocker-cum-drifter, the British public was presented with a smartly dressed, pleasant, smiling, happy-go-lucky personality; sharp and challenging, but not too threatening.

As the image of John and the rest of the Beatles was "upgraded," so too did the group's career get a tremendous boost. The initial contract with EMI promised limited financial rewards for John and the others, but it did lead to what would become a tremendously fruitful relationship with producer George Martin.

Poised and self-assured even as a very young man, Martin had joined EMI in 1950, as assistant to A & R (Artists & Repertoire) executive Oscar Preuss. Together, they toiled for Parlophone, an EMI label for which the parent company had nothing but disdain. Throughout the 1950s, Parlophone releases -- largely recordings by bland orchestras and crooners -- were expected by EMI to sell in absurdly small numbers -- and did.

Oscar Preuss retired in 1955 and Martin -- at 29 -- became head of the Parlophone label. By the late fifties Martin and Parlophone had found some success with comedy records featuring the likes of Peter Sellers and Flanders & Swann, but musical success remained elusive.

Martin had studied piano and oboe, and had once worked for the BBC Music Library. Rock 'n' roll was not his sort of music, but he dutifully signed rock artists to his label beginning in the late fifties. John and the rest of the Beatles met Martin for the first time on June 6, 1962. The producer was not convinced of the band's commercial potential, and had no doubts at all about what he perceived to be the musical shortcomings of drummer Pete Best. With band members also opposed to keeping on Best, he soon was supplanted as the group's drummer.

So it was that, with Ringo Starr as the newest Beatle, a simple Lennon-Paul McCartney composition called "Love Me Do" was released in Britain in October 1962. The record sold well in Liverpool from the start and slowly found an audience throughout the rest of the nation. Modest airplay on the BBC eventually pushed "Love Me Do" to No. 17 by December.

The severe British winter of 1962-63 was brightened by the January release of the Beatles' second Parlophone single, "Please Please Me," another Lennon-McCartney composition. It reached No. 2 on the British charts by the middle of February 1963, and by the end of the month the record was No. 1. The Beatles had arrived.

The group's first album, titled Please Please Me, was quickly but shrewdly produced, to capitalize on the success of the title track. Among the LP's 13 other cuts were "Misery," a remarkable version of "Twist and Shout," "I Saw Her Standing There," and "Do You Want to Know a Secret?"

With EMI’s U.S. subsidiary, Capitol, at first reluctant to issue the Beatles’ recordings in the U.S., more nondescript labels initially took up the challenge.

The album and its accompanying publicity suggested that the Beatles were happy, peppy, and well-behaved. From the beginning, John felt stifled by this image, but he was prepared to compromise himself in order to achieve the success that he and his colleagues had fought for so long and hard. He would give interviews, pose for photos, sign autographs, and shake hands with people for whom he often had little time. The sharper side of his nature was never far from the surface, however, and the public would get small glimpses of this on the occasions when he would accidentally (or, sometimes, intentionally) let his guard down.

"The Beatles' first national [British] coverage was me beating up Bob Wooler at Paul's 21st party, because he intimated I was homosexual," John recalled in a 1980 conversation with the BBC's Andy Peebles. "I was very drunk and I hit him ... and that was in the Daily Mirror. It was the back page, I remember the picture."

The story began uneventfully enough. Shortly after Lennon's wife Cynthia had given birth to their son, John Charles Julian Lennon, on April 8, 1963, John had taken off with Brian Epstein for a 12-day vacation in Spain. On their return, gossip around Liverpool was rife as to why John had spent time alone with the Beatles' manager.

In interviews given just before his death, John himself asserted that his friendship with Epstein had been platonic and that, ever curious, he had simply set about discovering how a homosexual man thought and behaved, at a time when such a subject was still cloaked in mystery.

"We used to sit in a cafe in Torremolinos looking at all the boys," John told Playboy's David Sheff, "and I'd say 'Do you like that one, do you like this one?' I was rather enjoying the experience, thinking like a writer all the time: 'I am experiencing this,' you know."

Talking to the late Roger Scott on London's Capital Radio, McCartney gave his own view of the situation: "John, not being stupid, saw his opportunity to impress upon Mr. Epstein who was the boss of this group. And I think that's why John went on holiday ... he wanted Brian to know who he should listen to in this group."

Whatever John's reasons, when Wooler, a deejay at the Cavern Club where the Beatles frequently played, sidled up to him at Paul's birthday party held on June 18, 1963, and insinuated that he was gay, he made a double mistake: John was not only insulted, but he was also drunk. The demon liquor always brought out his aggressiveness and, realizing this, he would pretty much stay away from it throughout the Beatle years.

"He never really got into much that was vicious or hard," says his ex-Art College friend, Bill Harry. "He didn't know what it was like to live in a really tough area. I mean, Menlove Avenue? He beat up Bob Wooler when he was drunk, but Bob couldn't hurt a fly! You couldn't say that was being tough. Over the years there have been these stories of how fights would break out at some of the venues that the Beatles played in Liverpool in the early days, but more often than not they probably ran as fast as their legs could carry them. So in John's case, I think the toughness was just a cover."