The Death of Stuart Sutcliffe 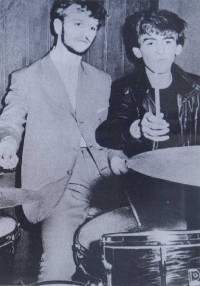 George Harrison with a pre-Beatle Ringo Starr at The Cavern Club, 1961. As a member of Rory Storm and the Hurricanes, Ringo conformed to that band’s dapper image.

On arriving at Hamburg Airport on April 11 for a tour, the Beatles were greeted by Astrid Kirchherr and the news that Stuart Sutcliffe, the bassist who had left the group to stay with her in Germany, had died the previous day of a suspected blood clot on the brain. He was only 21.

Although they hadn't been seeing as much of each other lately as during the previous year, John and Stu had regularly kept in touch by letter. For both of them this was a form of release, a way of expressing some of their innermost thoughts, without fear of ridicule by those around them. Pages and pages would travel back and forth between England and West Germany, detailing many of the things, both good and bad, that had taken place recently, accompanied by cartoons, jokes, and poems.

Hunter Davies, in his book, The Beatles,cites one of the most revealing pieces, in which John described to Stu his feelings of guilt over the way that he knew he sometimes hurt people:

"I can't remember anything without a sadness, So deep that it hardly becomes known to me. So deep that its tears leave me a spectator of my own stupidity."

In return, many of Stu's letters in recent months had described the blinding, unbearable headaches that he had been suffering from, and which doctors had failed to diagnose. The last thing that John had expected, however, was for him to die so suddenly, and his reaction was two-fold: First, echoing the situation when Uncle George Smith had died almost five years earlier, John burst into a fit of hysterical laughter (hardly what Astrid -- having arrived at the airport straight from the hospital -- could have needed).

Then, without shedding any public tears, he withdrew into himself and spoke very little about the subject. One of the few things he did say came in the form of this typical down-to-earth advice to Stuart's distraught girlfriend, revealed by biographer Ray Coleman in John Winston Lennon: "Make your decision. You either die with him or you go on living."

There it was. Cut and dried. With John there was no in-between.

"I knew that he and Stuart genuinely loved each other," Astrid recalled for Coleman. "They told me so, when they got loose ... How John got over that period I'll never know."

What he did, in fact, was to absorb himself in his music. He was getting pretty used to suffering tragedy by now, and his way of dealing with it was to confine it to the past and get on with the present.

More unpleasantness lay ahead, for next on the agenda was the ousting of Pete Best from his position as the Beatles' drummer. The quietest member of the group, Pete was also arguably the handsomest, and certainly the one that the girls at The Cavern most swooned over.

Pete's recollection of his dismissal, reported by him in his 1985 autobiography, Beatle! The Pete Best Story, co-written by Patrick Doncaster, is blunt and unsentimental. In the pre-Brian Epstein days, Pete and his mother had presided over many of the band's bookings, yet his only reward for staying faithful through thick and thin, and helping to gain the prized recording contract, was to be told by new manager Brian that "The boys want you out and Ringo in ..."

Richard "Ringo Starr" Starkey was at that time a competent but unremarkable drummer playing with Rory Storm and the Hurricanes, someone who had become friendly with the Beatles in Hamburg. Why he was brought into the group to replace Pete Best remains open to conjecture.

The reason given at the time was that Pete's drumming wasn't good enough, and that his shy disposition didn't fit in with the quirky nature of the rest of the group. Others who were around have suggested that the ousting was due to McCartney and Harrison's jealousy over Pete's popularity with the female fans. Either way, John, Paul, and George hardly emerged with any credibility from this episode, and the fact that they got Brian to do the dirty work only emphasized this point.

"That John Lennon had not even dared to face me bit deeply," admitted Pete in his book. "I was closer to him than I was to any other Beatle; I had known him intimately for around four years, which is a long time in a young life, and I was fond of him and had much respect for him."

Speaking to biographer Hunter Davies in 1968, John himself commented: "We were cowards when we sacked [Pete]. We made Brian do it. But if we'd told Pete to his face, that would have been much nastier than getting Brian to do it. It would probably have ended in a fight if we'd told him ..."

This was the contradictory side of John Lennon, a man who could face up to a situation one minute and run for cover the next. In his defense, it must be made clear that this was a trying time for him. In her book, A Twist of Lennon, girlfriend Cynthia Powell remembers that, not long before, she had told him that she was pregnant, and John, a man with an offbeat outlook but old-fashioned values, had immediately responded, "There's only one thing for it, Cyn, we'll have to get married."