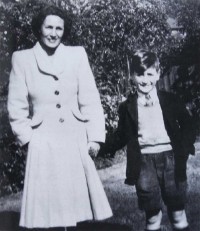 Dressed in his school blazer, eight-year-old John poses with his aunt, Mimi Smith, in the garden of their Liverpool home.

John Lennon would not spend the bulk of his childhood living with his mother, Julia Lennon. Having made her point and won her battle when John chose her over his father, Julia Lennon placed her son back in the sedate and comfortable setting of Mendips, Mimi and George Smith's house at 251 Menlove Avenue, situated in the middle-class Liverpool suburb of Woolton.

Here John would spend his days playing with friends, indulging his passion for drawing and, after Uncle George had taught him how, reading books and newspapers in his small bedroom above the front porch. Among his favorite books were Just William, Alice's Adventures in Wonderland, and The Wind in the Willows.

By the time he was seven he had compiled his own series of jokes, drawings, and cartoons, under the title of "Sport, Speed and Illustrated. Edited and Illustrated by J. W. Lennon." Possibly influenced by occasional outings to the cinema, each installment ended with "If you liked this, come again next week. It'll be even better."

The infrequent visits by Julia added to the household's overall feeling of stability. Looking back on this period Mimi, together with her three other sisters -- Anne, Elizabeth and Harriet -- would recall to biographer Hunter Davies that the pre-teen John "was as happy as the day was long."

That may have been true on the surface, but John's attitude at school displayed an underlying anger and frustration, possibly because of his parents' neglect. The teachers noted his talent for art and his sharp mind, but also suffered a boy with a sharp tongue and an appetite for fighting and mischief making.

Hunter Davies quotes John as admitting, "I fought all the way through Dovedale. I learned lots of dirty jokes very young; there was this girl who told me them … Other boys' parents hated me. They were always warning their kids not to play with me."

Not that this bothered John -- quite the opposite, in fact, for the boy discovered that a shabby appearance only enhanced the effect of rebelliousness. Seeing conformity as a sign of weakness, he hated the idea of a school uniform, and he made this quite clear by wearing a black blazer that often looked more like a crumpled bag, a white shirt that was usually unbuttoned, and gray shorts that would typically be covered in mud.

For the ultra-strict Mimi this kind of behavior was too much to endure. One of John's favorite stories about his aunt centered around the time she was walking down Penny Lane and saw a crowd observing a fight between a couple of "common scruffs." As recounted by Hunter Davies, Mimi confidently assumed that the battling youngsters were from one of the rougher schools in the area, but when the fists stopped flying she saw "this awful boy with his coat hanging off. To my horror, it was Lennon!"

Poor Mimi. Here she was, doing her best to bring John up "properly," and all he could do was let her down! Still, intelligence combined with a minimum of studying saw him through the "11-plus" (high school entrance) test, an accomplishment that earned him a brand new bicycle, courtesy of Uncle George. In September of 1952 John turned up for his first day at Quarry Bank Grammar School. Mimi had decided against the highly respected Liverpool Institute because it was situated farther away, and besides, Quarry Bank was located in a nicer, more residential district.

"I looked at the hundreds of new kids," John told Hunter Davies, "and thought, Christ, I'll have to fight my way through all this lot!"

Richard Buskin Dovedale Primary School, where John began studies in 1946. A painting he did here at age 11 in 1952 later adorned the sleeve of his Walls and Bridges album.

Helping out on this unpeaceful venture was a friend, Pete Shotton, a fuzzy-haired boy who had also made the switch from Dovedale. John, by his own admission, saw aggression as his route to popularity. Never one to simply merge into the background, he had to be the leader, the hero, the center of attention. Shotton was his loyal second-in-command, and together they set about breaking every rule they could.

"We were always looking to get into mischief," Pete remembered in a previously unpublished interview with music researcher David Stark. "Doing things that were anti-social or anti-adult, and which we knew would shock everyone."

Swearing, smoking, fighting, and penning obscene poems and drawings were all part of the rogues' repertoire, as were other petty offenses that found their way onto the John Lennon school report: "Insolence," "cutting class," and "throwing blackboard out of window."

In the book John Winston Lennon, author Ray Coleman quotes Eric Oldman, John's housemaster and chemistry teacher, who remembered that "[John] was awkward, but there was something in him. It wasn't sheer wickedness, but more spirit. ...He seemed determined not to conform to the rules. But he had a wit and a humor and ability."