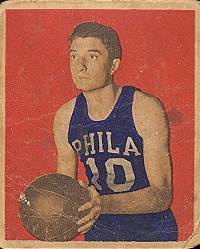 Joe Fulks was named to the NBA's Silver Anniversary Team in 1970. See more pictures of basketball.

Jump-shooting Joe Fulks turned professional basketball upside down in the 1940s. Before Fulks, one-handed and two-handed set shots were the norm. Fulks didn't invent the jump shot, but he was the first to use it extensively in the pros. Twice he led the Basketball Association of America in scoring, and in 1949 -- the year before the BAA changed its name to the NBA -- he scored 63 points in a game, a record that stood for a decade.

A 6'5" whippet, Fulks shot with reckless abandon, even casting turnaround 20- footers if the mood was right. In each of his first three pro seasons, before the advent of the 24-second shot clock, he led the league with nearly 30 attempts a game. During the 1946-47 season, he averaged 23.2 points, an eye-popping total for the era and 6.4 points more than his nearest pursuer in the scoring race.

Born October 26, 1921, in Birmingham, Kentucky, Fulks played in relative obscurity at Murray State, then left for a three-year tour in the military. Meanwhile, Eddie Gottlieb had formed the Philadelphia Warriors and was looking for players. Advised that Fulks could help, Gottlieb signed him to a contract in 1946. With Fulks leading the charge, the Warriors beat the Chicago Stags 4-1 for the BAA championship in the spring of 1947. Fulks scored 37 points in the first game of the series and 34 in the last.

On February 10, 1949, Fulks obliterated the one-game scoring record with 63 points against the Indianapolis Jets. That mark lasted until 1959, when Elgin Baylor scored 64. Fulks's exploits helped secure him a spot on the 1948-49 all-league team, which also included George Mikan, Jim Pollard, Max Zaslofsky, and Bobby Davies.

Five years later, Fulks was out of basketball. His scoring average dropped steadily after his 30th birthday, leading him to retire from the Warriors in 1954 with a career average of 16.4 points per game. He was named to the NBA's Silver Anniversary Team in 1970 and was elected to the Hall of Fame in 1977, a year after his death.