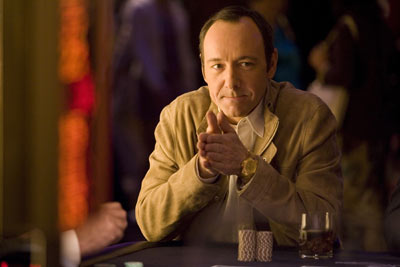 In "21," Micky Rosa (Kevin Spacey) is an enigmatic statistics genius who's figured out how to beat Vegas at blackjack.
Peter Iovino © 2008 Columbia Pictures Industries, Inc. and GH Three LLC All Rights Reserved

"21" was shot in winter 2007 in Las Vegas and Boston. Interiors were, for the most part, filmed on stages in Boston, but a few Vegas hotels did grant permission to film inside their casinos. "They either welcomed us with open arms or didn't want anything to do with it," director Robert Luketic says. "[Some hotels] didn't want to glamorize cheating. They put too many restrictions on us. But Planet Hollywood and the Hard Rock let us shut down entire sections, in peak time, perhaps because of the younger clientele they attract."

Shooting in a working casino and separating 200 extras from civilians was difficult, to say the least. "We had a lot of security, but just trying to control such a public place was hard. It hindered us at times," Luketic says.

The movie's climactic chase scene was filmed at Planet Hollywood, at least in part. "Once they burst behind the scenes at the casino, that's a convention center in Boston," Luketic says. He put the scene to the side for a month and came back to it, which caused continuity problems. "Minutiae like the hair, which hand the bag was in -- all those things have to be recreated … It might not seem like it but there's a lot of discussion that happens before the camera rolls, and a lot of nervousness."

Another memorable scene, in which two characters are stationary as the sped-up action takes place around them, "was a very complicated sequence that was shot over many, many weeks in all sorts of locations, at different speeds," Luketic says.

All the Las Vegas scenes had to be shot out of sequence at the start of production. But the cast had gone through "blackjack boot camp" for a few days before the shoot, learning the ropes from gambling expert Kyle Morris. "We sent them to chip-handling classes, to card-counting classes," Luketic says. "Some of them had never touched chips in their lives. We had to teach them how to do that, play the game plus learn all the hand signals and create a performance within that."

Some were quick studies. "Kate Bosworth and Aaron Yoo [who plays Choi] picked it up incredibly fast," says Luketic. "Kate was spinning chips around her fingers like a professional."

Boston posed its own set of production problems, especially during the coldest winter on record. And MIT refused to allow filming on campus -- so Luketic shot from a helicopter and on the street in front of the campus. Boston University and Harvard Medical School were more welcoming, he says.

Although Jeff Ma wasn't an official adviser, he was on set in Las Vegas and visited several times in Boston, making himself available to the actors. He joined their ranks briefly, playing a blackjack dealer in one scene: "I can't even begin to tell you how surreal it was."

Robert Luketic revisits the romantic comedy genre in "The Ugly Truth," starring Katherine Heigl and Gerard Butler, who plays "the most misogynistic pig of a man you'll ever meet." The "very racy" movie will shoot in Sacramento and Los Angeles in April 2008.­

Luketic's next project, in negotiations, "involves grand adventure and romance in exotic ports of call." He also has his eye on "Matt Helm," based on the Donald Hamilton spy novels. He has a star in mind, "but I would have my hand chopped off if I revealed it." The script hasn't been written yet, but chances are there will be a romantic storyline. "From a commercially selfish point of view, I like to make movies that appeal to both men and women," Luketic says. "I want people on date nights to both have a good time, not for one to be dragged reluctantly."