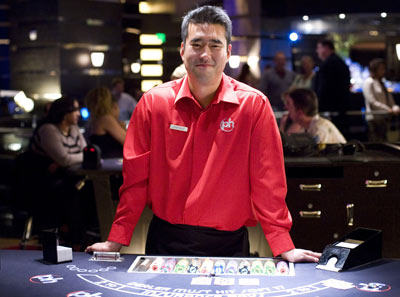 So, how did they do it? The MIT team's intricate system certainly paid off -- but it wasn't totally foolproof.

"To optimize the time we spent in the casino, we had a division of labor," Jeff Ma says. "The back counter stood by a table and counted. The spotter played low-wager bets and signaled to the big player when the table was hot. And the gorilla player didn't count -- he was signaled what to bet."

The signal system was based on values they assigned to the cards. Each number in the count had a corresponding code word. "For example, the word for plus 15 was paycheck. The spotter might say to the dealer, 'You're making me lose my whole paycheck!' Then I'd know the count was plus 15," Ma says. "We also had hand signals. Touching your nose meant you understood what was being conveyed to you. Touching your eye meant 'follow me.' Touching your ear meant you didn't hear and needed the information repeated. Rubbing your hands through your hair meant you thought we were getting attention and needed to get out of there. Touching the back of your neck meant it was time to quit."

Of course, they sometimes made mistakes -- inadvertently using code words and signals, for example. Ma once absentmindedly touched the back of his neck and looked around to discover that his partners had left, as instructed.

The team members frequently changed their hair, makeup and wardrobe but were nevertheless eventually banned from the blackjack tables at many casinos, including the Hard Rock, one of those featured in the movie. "That was the first casinos where I was kicked out and told I couldn't play blackjack anymore," Ma says. "That [scene] really brought back a lot of memories."

Ma decided not to go to medical school -- he became an options trader in Chicago, moved back to Boston and invested some of his six-figure earnings in a house, a bar and Internet companies. He teaches card counting on the Web but doesn't do it himself anymore. Going to Las Vegas now is "a totally different experience," he says. "Before, it was a business trip. Now it's a vacation."

Gambling Notes from the Master

"If you remove all the aces from a deck, there's zero chance of getting blackjack," says Jeff Ma. "So by tracking what you've seen, you have an understanding of what you're going to see, and therefore an understanding of your chances … and you adjust your bet accordingly. When there are a lot of low cards left it's in the dealer's favor, and when there a lot of high cards left it's in the player's favor.­

"Twos, threes, fours, fives and sixes are worth plus one, 10s and face cards are worth minus one. Sevens, eights and nines are neutral. You keep a running tally [of the dealt cards], and when the number is high on the positive side, that's good because it means you've seen a lot of low cards and there are a lot of high cards left in the deck."

Card counting isn't illegal, but casinos don't approve, for obvious reasons. Most of them now use cameras with facial recognition software that can see through the cleverest disguise. "It's harder to do on the scale that we did it," Ma says. "But to do it to have some fun and make a little money, I think you can still do it."