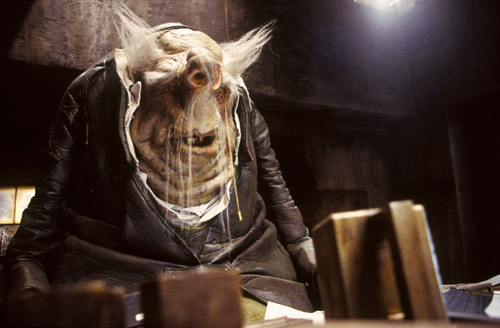 The road to Touchstone's new movie version of The Hitchhiker's Guide to the Galaxy has been a long one. The film -- or at least the idea of the film -- has been in the works for more than 20 years. At one point, the series creator Douglas Adams was quoted as saying that the movie would be made "sometime before the last Trump."

20.) The movie was first optioned in 1982, by producers Ivan Reitman, Joe Medjuck and Michael C. Gross. Douglas Adams wrote three different versions of the script for the production team. Reitman and company intended the sci-fi comedy to be a vehicle for either Bill Murray or Dan Aykroyd. At the time, both actors were considered for the role of Ford Prefect.

In the end, Adams' script was trumped by another sci-fi comedy idea that Dan Aykroyd presented to the production team. Yes, The Hitchhiker's Guide to the Galaxy was indefinitely postponed so that Reitman and company could make Ghostbusters.

21.) In 1997, after years of on-again-off-again interest in the project, Adams finally signed a deal with Disney to make the film. Adams started working on a new version of the script, and Disney put Jay Roach (Austin Powers) in the director's chair.

23.) Jay Roach eventually backed out of the project. Wanting the film to be in good hands, he brought the project to Spike Jonze. Jonze also passed on the movie, but suggested the directing team of Hammer and Tongs -- AKA Nick Goldsmith and Garth Jennings. The duo, known mainly for music videos, accepted and the project was under way.

24.) Adams wrote the latest version of the screenplay himself, but Garth Jennings and Karey Kirkpatrick revised the script after Adams' death.

26.) Simon Jones, who played Arthur Dent in both the radio and television versions of The Hitchhiker's Guide to the Galaxy, has a cameo in the film. Jones was a life-long friend of Douglas Adams.

27.) The original Marvin the Paranoid Android from the TV miniseries appears in the movie as a different robot.