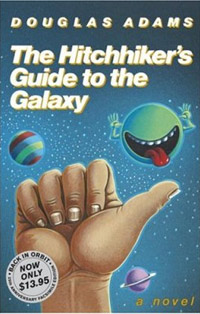 The first of five books in the "trilogy"

With the success of the radio series, Adams was persuaded to put his story in book form. From 1979 to 1992, Adams published the inaccurately titled, five-book Hitchhiker's Trilogy.

12.) The book, The Hitchhiker's Guide to the Galaxy was published in England in September of 1979. It was an expanded version of the first four radio episodes. It spent several weeks as a Sunday Times Mass Market Best Seller. Because Adams had blown so many deadlines while writing the first book, the publishers eventually called him asking that he simply finish the page he was writing. And they immediately sent a bicycle courier to pick up the manuscript. That is why the first book ends so abruptly.

13.) In the fall of 1980, the second book, The Restaurant at the End of the Universe, hit store shelves. This was the same time the first book was released in the United States. The book was a condensed and out-of-order version of episodes seven, eight, nine, 10, 11, 12, five and six of the radio show.

14.) The third book, Life, the Universe and Everything, came out in 1982. The story begins to take a darker turn in this book and begins to push the plot beyond what was covered in the radio series.

16.) The final book, Mostly Harmless, came out in 1992. It ended the series story arc with the destruction of the Earth (again).

17.) In 1984, Douglas Adams became the youngest author ever to be awarded a Golden Pan Award from Pan Books, the UK publisher of the book series. He was also later nominated for the first Best of Young British Novelists awards.