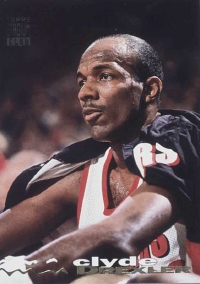 Clyde Drexler soared into the NBA in 1983 to begin a career that would bring him fame, fortune, and -- after a dozen years of trying -- an NBA championship ring. In his 15-year career, Drexler scored 22,195 points, was named to nine All-Star Games, and had been hailed as the best guard in the game not named Michael Jordan.

Early in his career, Drexler was known mostly for his 43-inch vertical jump and his ability to execute dunks -- helicopters, tomahawks, alley-oops -- just like his childhood hero, Julius Erving. As his career wound down as a member of his hometown Houston Rockets, Drexler has become a better overall player, improving his passing and defense and sharpening his jump shot. He still played the game with flair, however, as GQ magazine tabbed him "the coolest guy in the league."

Born June 22, 1962, in New Orleans, Drexler grew up in Houston and played for the University of Houston Cougars, who featured the "Phi Slama Jama" front line of Drexler, Hakeem Olajuwon, and Larry Micheaux. Their games were veritable dunkathons. The only thing missing was a national championship, as visits to the Final Four in 1982 and 1983 ended with bitter defeats.

The 14th pick in the 1983 NBA draft, Drexler joined the Portland Trail Blazers with little fanfare and was used sparingly his rookie season, averaging 7.7 points. From there he began a steady climb, increasing his scoring each season to a peak of 27.2 points per game in the 1988-89 season. Portland advanced to the NBA Finals twice during Drexler's tenure, losing to Detroit in 1990 and Chicago in 1992. The 1991-92 season was Drexler's best; he averaged 25.0 points, led the Blazers in assists, and was runner-up to Jordan for the NBA MVP Award.

Drexler became increasingly unhappy as the Blazers slid from prominence following the 1992 playoffs. Midway through the 1994-95 season, the Blazers accommodated his demand for a trade, sending him to the Rockets to be reunited with Olajuwon. A few months later, after sweeping the Orlando Magic in the Finals, the Rockets won the NBA championship.