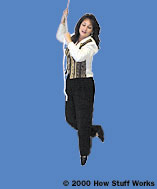 Film of the actress dangling from a rope in the studio, shot in front of a blue screen

Now let's say that you are a director and you would like to film a scene where the actress is dangling from a rope over a deep river gorge screaming for the hero to come save her. As the director, you have several options:

The blue screen technique lets you combine two or more pieces of film into one piece that looks very real.

To use the blue screen technique, you first film the river gorge on location. This shot is called the background plate. You then film the actress dangling from a rope 2 feet off the ground in a studio. Behind the actress in the studio you place a bright blue background screen (hence the name "blue screen"). You end up with two pieces of film that look like this:

Film of the river gorge, known as a "plate"

In the special effects department you can easily use special filters to form two mattes from the shot of the actress. One shows the actress's silhouette in black, and the other is the reverse, like this:

The matte of the actress's silhouette
The reverse matte

These mattes are easy to create because the bright blue color, when run through a red filter, turns black. By using high-contrast black-and-white film to create the mattes, you can create the silhouettes. So now you have four pieces of film: the two originals and the two mattes. By combining these pieces of film in layers you can create the final piece of film for the shot. First, you combine the background with the actress's silhouette:

Then, you rewind the film and re-expose it to lay the actress into the "hole" that the matte created. The actress now looks like this:

This is called a traveling matte because the matte is different for each frame of the film. In a static matte, you simply tape black paper over the lens and that single matte is the same for the entire shot. In a traveling-matte shot, you need to create a matte that is exactly the same shape as the actress. In each frame, the actress moves, so a new matte is required for each frame. It is possible to create these individual mattes by hand, but it takes a tremendous amount of time. The blue screen behind the actress makes it easy to create all of the mattes automatically using optical or digital techniques.

The blue screen technique is also used extensively in science fiction films such as "Star Wars" and "Star Trek" to make the spacecraft models look real. The models are filmed separately on blue backgrounds and then combined in multiple layers to make the final film. Very complex shots with hundreds of layers have been created.

In order for a blue screen shot to look convincing, several things are important:

With computers, blue screen shots are even easier because the computer can create the mattes and combine the shots automatically. Many of the links below describe different digital techniques.

The next time you go to a movie, you'll understand how they make some of these impossible shots -- but you can still be amazed at how real they look.

For more information on blue screens and other special effects techniques, check out the links below.