How to Play Basic Guitar Chords in 6 Easy Steps 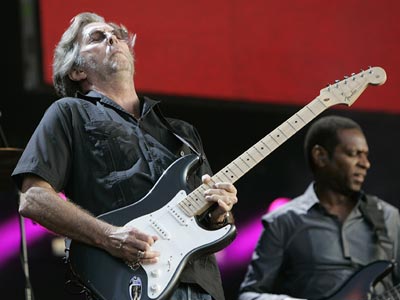 You've just picked up a guitar, intent on becoming the next Eric Clapton or impressing your friends with some tunes. There's just one problem - you don't know a fret from a Fender.

Don't know a thing about strings? Do the notes you play have more twang than a country music star? If so, this tutorial from iVideosongs is for you.

The guitar has gone throu­gh several transformations throughout its history. Until the 18th century, the instrument had between three and five courses, or paired strings. You'll still find guitars with varied numbers of strings today, but the modern acoustic guitar typically has only six.

­Even the materials used for guitar strings have changed over the years. At one time, animal intestines were used, and although you c­an still purchase gut strings today, modern strings are made from a range of materials: brass, bronze, steel and a variety of synthetic fibers. These different materials change the guitar's sound; classical guitars, for example, use nylon strings to produce their distinctive tones.

­Regardless of the number of strings or what they're made of, however, you have to know how to handle them to play a song. This six-part series shows you how to fret notes, position your fingers and play some chords on an acoustic guitar. By the end, you'll be strumming Blues Traveler's "Run-Around" like a pro. Click over to the next page to start with the basics.

Rock stars make guitar playing look easy, but it takes a lot of technique and practice to make a guitar sing. As with any skill, you have to master the basics first. A guitar works by amplifying sound frequencies. The strings produce these frequencies, or tones, by vibrating.

The guitar has a long neck punctuated with metal bars called frets. Fretting is the action of pressing on strings close to the frets to change the tone. Thus, finger placement directly affects the sounds coming out of your instrument. Once you've watched this video to see fretting in action, click over to the next page and try your­ hand at chords.

Now that you've got the hang of handling strings, you're ready for chords. Chords are groupings of single notes, and there are five basic combinations that you'll find in most songs: C major, G major, D major, A major and E major.

In lesson two, the instructor demonstrates the finger positions for E major, the easiest of the chords. One of the trickiest things about chords is keeping your hands in the correct position. Check out the next video to finger the common culprits behind.

You may be savvy about strings now, but you can still bump into problems that will ruin your sound. Strumming each string separately is a good way to test a chord for tone. If you find a string that doesn't ring true, it's likely that your fingers or hands have crept out of position.

In addition to troubleshooting tips, you'll tackle a second chord in this video: G major. Fortu­nately, there's more than one way to play a G chord. Once you've mastered the most common method, click to the next page to try out the C and A major chords.

Basic Guitar Chords: The C and A Major Chords

The C major chord requires a bit of manual dexterity, as you have to stretch your fingers across the fingerboard. The A major chord can also be tricky, but there are multiple ways to play it. You may have noticed that you don't strum all six strings for all chords; you pick five strings at once for the C chord, for example, ­and only four for the D chord.

Some guitarists use their fingers to strum, but most use picks. As a beginner, you probably want to go with a pick and save your virgin fingers some grief. Once you've finished learning the major chords in this video, check out three minor chords on the next page.

The name makes them sound inferior, but minor chords are just as important as their major counterparts. In fact, they help round out your repertoire, giving you the ability to play more songs.

The major and minor chords differ in more than finger arrangement: While major chords ­produce a more cheerful sound, minor chords are the somber, brooding Beethovens of music. In this video, you'll try your hand at three of the minor chords: E minor, D minor and A minor (which isn't radically different from A major). Once you've mastered these final chords, proceed to the last video of the series to learn how to turn them into songs.

This video teaches you how to progress smoothly from one chord to the next, as you would when playing a song. One common progression is from G major to C major to D major, and the instructor will show you a way to handle this transition more smoothly. Once you've mastered tran­sitions, you'll be ready to rock out, starting with Blues Traveler's "Run-Around."

If you're stoked about guitar playing and want to learn more, rock on with the links on the next page.