Testing Athletes for Drug Use 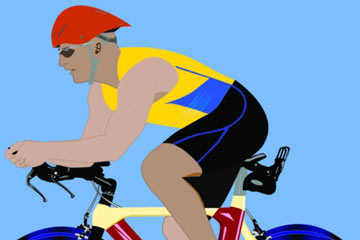 Some athletes find the temptation of performance-drugs too hard to resist.
iStockphoto/Thinkstock

The majority of drugs that can be used by athletes can be detected in samples of urine. An athlete is told by a drug control officer to submit a urine sample for testing. The sample is then sent to a laboratory for analysis and the results are reported back to the governing athletic agency. For some substances, blood samples may be required.

Gas chromatography and mass spectrometry are the most common methods of chemical analysis. These tests can be done on urine and blood samples. In gas chromatography, the sample is vaporized in the presence of a gaseous solvent and placed through a long path of a machine. Each substance dissolves differently in the gas and stays in the gas phase for a unique, specific time, called the retention time. Typically the substance comes out of the gas and is absorbed on to a solid or liquid, which is then analyzed by a detector. When the sample is analyzed, the retention time is reported or plotted to create a chromatogram. Standard samples of drugs are run, as well as the urine/blood samples, so that specific drugs can be identified and quantified in the chromatograms of the urine/blood samples.

In mass spectrometry, samples are blown apart with an electron beam and the fragments are accelerated down a long magnetic tube to a detector. Each substance has a unique "fingerprint" in the mass spectrometer. Again, standard samples are run for identification and quantification of drugs in the urine/blood samples.

Some substances (such as HCG, LH, ACTH) can be measured in urine samples using an immuno-assay. In this test, the sample is mixed with a solution containing an antibody specific to the tested substance. An antibody is a protein that binds only a specific substance and is how the body recognizes foreign substances. The antibody in the test is usually tagged with a fluorescent dye or radioactive substance. The amount of fluorescent light or radioactivity is measured and is related to the concentration of the tested substance in the sample.

Tests for EPO have been recently developed. One EPO test looks at the size of red blood cells. It has been noticed that synthetic EPO produces red blood cells that are smaller and bind more iron then natural EPO. So, the size and iron content of red blood cells from a blood sample are analyzed to determine whether an athlete has used EPO.

In 2008, the International Cycling Union introduced a blood passport practice. The anti-doping procedure monitors the characteristics of an athlete's blood over a period of time. For example, hematocrit levels (the percentage of red blood cells to the total volume of whole blood) are tracked for abnormal spikes. Red blood cells carry oxygen -- a spike in hematocrit levels would, therefore, enhance a cyclist's performance and indicate doping.

Until approximately 2010, there were no reliable tests for HGH. But a blood-testing innovation proved to be effective enough to lead rugby officials in Britain to suspend an athlete for violating the ban on Human Growth Hormone in February of that year. The National Football League is now advocating HGH testing, though the NFL Players Association has voiced its opposition [source: ESPN].

Although there is little statistical evidence on how widespread doping is, athletes and coaches stress that most competitors do not take drugs. Nonetheless, drug testing is becoming an increasingly integral part of sports competitions. As new performance-enhancing drugs are developed, new tests are developed to detect these drugs, and the struggle to keep sports clean continues indefinitely.

For more information on performance-enhancing drugs, drug testing, and related topics, check out the links below.