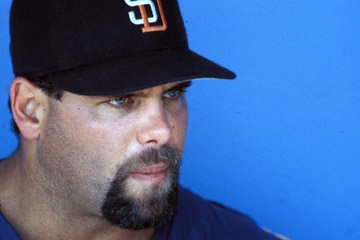 Ken Caminiti, shown in file photo from a 1998 game with the San Diego Padres, died of a heart attack in 2004 at age 41. Caminiti, the 1996 National MVP, admitted he used steroids during his career that ended in 2001.
Kirby Lee/WireImage

In addition to taking drugs that build mass and strength, some athletes take drugs and engage in practices that increase the amount of oxygen in tissues, including protein hormones, artificial oxygen carriers and blood doping.

Erythropoietin (EPO) is a naturally occurring protein hormone that is secreted by the kidneys during low-oxygen conditions. EPO stimulates the bone marrow stem cells to make red blood cells, which increase the delivery of oxygen to the kidney. Endurance athletes, such as those who compete in marathons, cycling or cross-country skiing, can use EPO to increase their oxygen supply by as much as 7 to 10 percent. EPO is difficult to detect. The increased red cell density caused by EPO, however, can thicken the blood. The thickened blood, which is more like honey than water, does not flow through the blood vessels well. To pump the thickened blood, the heart must work harder, which increases the chances of heart attack and stroke.

Artificial oxygen carriers are man-made substances that can do the work of hemoglobin, the oxygen-carrying protein in your blood. Doctors use them to treat breathing difficulties in premature infants, patients with severe lung injuries and deep-sea divers. They include substances such as perfluorocarbons, synthetic- or modified-hemoglobins and liposome-encased hemoglobins (artificial red cells). It is not clear how they benefit athletes. Possible side effects include immune-system problems, cardiovascular problems, iron overload and kidney damage.

Blood doping is the practice of infusing whole blood into an athlete in order to increase oxygen delivery to the tissues. A similar effect can be achieved by training at high altitudes. An athlete who infuses his own blood may cause infection or cardiovascular problems because of the increased blood volume (high blood pressure, blood clots, heart failure and stroke). An athlete who uses someone else's blood runs the risk of acquiring viral infections such as HIV/AIDS.