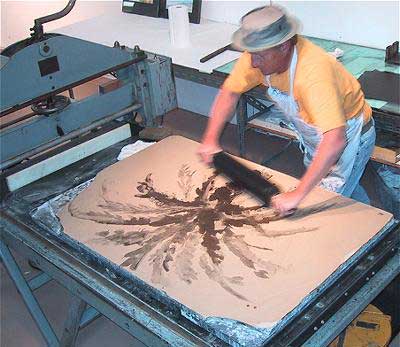 Ever since man first created his earliest works of art thousands of years ago, there have been two parts to the artistic process. The first part happens in the artist's mind, where he or she conceives of the idea that will be portrayed in the work. The second part happens in the artist's hands, as the idea is translated into a specific medium that other people can appreciate. Visual mediums can be quite diverse and include:

(We've ignored sculpture, music, dance, film, etc. and have focused on visual media that are comparable to the topic of this article.)

When the printing press first appeared on the scene, it opened up a new medium in the form relief prints. The artist could carve an image onto wooden or metal blocks, ink the block and impress it on paper. Relief printing created the first form or reproducible art.

The problem with relief printing is that the artist must carve the image, and the carving action is unnatural to an artist who normally works in a medium like paint and pencil.

In this article, you will learn about stone lithography techniques by watching the entire process as practiced by Toby Michel of Angeles Press. Toby is a master printer who trained at the Tamarind Institute. Toby, collaborating with artist Peter Alexander, will demonstrate how to create a limited edition print using a technology that is over two centuries old.

Let's start by learning how you can use stone to put ink onto paper. 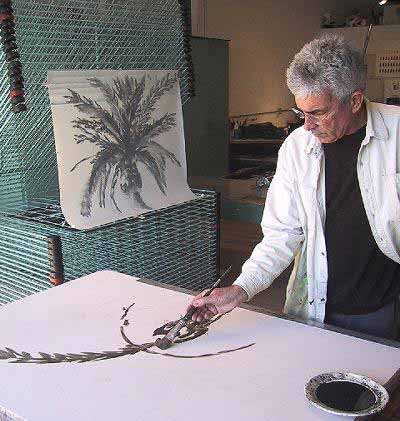 Stone lithography was invented in 1798, and it was the first new printmaking technique to emerge in about 300 years. Stone lithography became very popular as a medium by the 1830s. People used stone lithography to create color art for books, as well as for more pedestrian things like labels, flyers and posters.

Stone lithography's popularity with artists came about because it was the first printmaking medium to allow the artist to naturally "paint" or "draw" onto a flat stone to create an image. The artist creates the work directly and naturally.

The basic idea used in stone lithography is extremely simple:

As you will learn in this article, the details of preparing and inking a stone to create a print is far more involved than this, but that is the basic idea.

To get a better idea of how stone lithography works in the abstract, imagine the following:

The essence of the technique is the affinity of oil for oil and the repulsion of oil and water. In stone lithography, you use a flat limestone block when you create the original image.

The first step in creating a print using stone lithography is to prepare the stone for the artist. Toby selects a flat limestone block of the appropriate size. If the image will contain multiple colors, multiple blocks are used, one for each color. The best stones come from the quarry in Solenhofen, a town in Bavaria (see Printmaking dictionary: Lithography for details).

Stones are reused, so the first step is to grind the stone to remove the previous image and then polish the stone to prepare it for the artist. The following photographs show you the process.

A lithography image lives in the top 1/64th of an inch (about half a millimeter) of the stone. Grinding takes several hours on a large stone like this and will remove about a millimeter of the stone. If not enough stone is removed, it leaves a ghost of the previous artist's work, and that ghost will come through in the new image.

Once ground, Toby polishes the stone with progressively finer grits, moving from #80 to #100, #180 and finally #220 grit, to put a fine tooth on the surface. According to Toby, "One grain of #80 grit will sabotage you once you start polishing -- you use a lot of water and wash everything meticulously to get rid of every grain of grit. The stone, the levigator, your hands, your apron all get washed." Polishing a large stone can take three to five hours.

Once polishing is complete, Toby moves the stone from the graining sink onto a roll table in the studio so the artist can begin his work. One of the more interesting problems in stone lithography, especially on large prints, is "moving the stone." This block weighs about 600 pounds.

In Toby's experience, moving the stone "is best done by one person, despite the size: A lack of coordination can lead to smashed fingers or worse."

The artist uses litho pencils and crayons, as well as a greasy liquid called tusche, to create the image on the stone.

Litho pencils are waxy and range in hardness from 0, which almost melts in your hand, to 7, which is brittle.

Peter Alexander is a well-known artist who lives in Los Angeles, CA. Peter has created a sketch of his piece and uses it as a guide as he is working on the stone.

As the tusche dries, it reticulates. Net-like features are left on the stone and show up in the final print, a characteristic unique to stone lithography.

From the artist's standpoint, you can see that the process of preparing the work is extremely natural. There is not a tremendous amount of difference between drawing/painting on the stone and doing the same on a piece of paper. There are a few things to keep in mind, however:

Once the artist finishes, it is time to etch the stone to prepare it for printing. The process of etching fixes the artist's image on the stone -- makes it a part of the stone, in reality, through a chemical reaction involving nitric acid.

The process is described in the following photos.

The nitric acid reacts with the grease (oleic acid) to create oleomagnate of lime. The image literally becomes part of the stone. In the process, the acid sensitizes the dark areas so they accept ink and reject water, and desensitizes the light areas so they reject ink and accept water. Both the sensitization and desensitization happen in one step.

Next we'll find out about inking the stone.

The next step is to move the stone to the press and ink it for the first time.

According to Toby, you would never pull a proof at this point. He will re-etch it and let it sit overnight.

The day of the first proof is important for both the printer and the artist. All of the work of the past several days comes down to this moment. Here's what happens.

If the image has multiple colors, the artist creates multiple stones (one for each color). The printmaker repeats the printing process for all of the stones. See The Curwen Studio and Artchive.com for nice demonstrations of the techniques used in multi-color prints.

There is a line in the proof that Peter does not like, so he removes it using sandpaper, as shown below.

The stone is now ready to create prints.

If inked properly, the stone is good for 100 or 200 prints. Peter Alexander normally limits his print runs to a much smaller number. Of Peter's Cat Series, only 25 prints are available.

Now you have witnessed the entire process involved in creating a single-color fine art print using stone lithography. Toby's Angeles Press is an open shop that works with a wide variety of artists on works of varying sizes. Multiple-color printing involving three or more colors is common. Here are several examples:

Are you a student or an artist working in the medium of stone lithography? Toby has graciously offered to draw on his many years of experience as a master printer to answer questions that you might have about the techniques described in this article. You can send e-mail directly to Toby at this address: angelespress@earthlink.net.

For more information on stone lithography and related topics, check out the links on the next page.