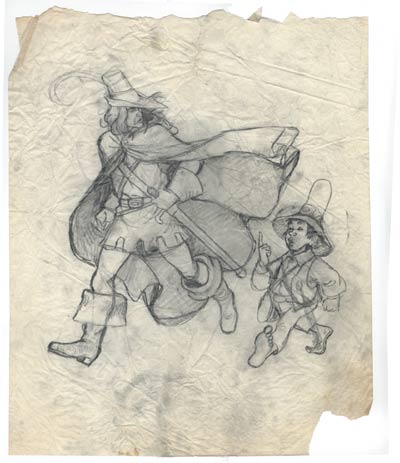 An early sketch of Aragorn and Frodo
Illustration courtesy Spiderwebart

When a non-artist looks at the elaborate illustration in the last section, the obvious question is "How do you work out all of the details?" For example, how do you decide what will be in the background? How do you decide how each person will be standing? How do you decide on things like facial expressions and arm positions? Hair? Shoes? Hoods? Belts? Weapons? Accessories? These are all details you have to understand before you can start painting.

In the case of the Tolkien illustrations, many of the basic notions and some of the details come from the word-pictures that Tolkien paints. For example, in Chapter 1 of "The Lord of the Rings", Tolkien paints a picture of Gandalf:

At the end of the second week in September a cart came in through Bywater from the direction of the Brandywine Bridge in broad daylight. An old man was driving it all alone. He wore a tall pointed blue hat, a long grey cloak, and a silver scarf. He had a long white beard and bushy eyebrows that stuck out beyond the brim of his hat.

In the forward to the book, Tolkien paints a picture of hobbit architecture:

The craft of building may have come from Elves or Men, but the Hobbits used it in their own fashion. They did not go in for towers. Their houses were usually long, low, and comfortable. The oldest kind were, indeed, no more than built imitations of smials, thatched with dry grass or straw, or roofed with turves, and having walls somewhat bulged. That stage, however, belonged to the early days of the Shire, and Hobbit-building had long since been altered, improved by devices, learned from Dwarves, or discovered by themselves. A preference for round windows, and even round doors, was the chief remaining peculiarity of hobbit-architecture.

The Hildebrandt brothers spent a lot of time interpreting these descriptions and experimenting with various representations.

"I picture a fairly human figure, not a kind of 'fairy' rabbit as some of my British reviewers seem to fancy: fattish in the stomach, shortish in the leg. A round, jovial face; ears only slightly pointed and 'elvish'; hair short and curling (brown). The feet from the ankles down, covered with brown hairy fur... Clothing: green velvet breeches; red or yellow waist-coat; brown or green jacket; gold (or brass) buttons; a dark green hood and cloak (belonging to a dwarf).... Actual size...say about three feet or three feet six inches... But since leathery soles, and well-brushed furry feet are a feature of essential hobbitness, he ought really to appear unbooted, except in special illustrations of episodes."

This type of word-picture gives the Hildebrandt brothers guidance. So, for example, in a painting that shows Gandalf meeting Bilbo, Gandalf has a pointy blue hat and a long beard, while Bilbo sits in front of a house with round windows and a round door. Bilbo is the right size, has hairy feet and pointy ears.

However, the brothers also have some liberty as illustrators. Tim notes, "When reading Tolkien's text, Greg and I questioned what it would look like if Gandalf's eyebrows stuck out past his hat. We decided not to follow his text literally because his description of Gandalf's eyebrows would have made them almost a foot long."

Given this guidance, there are still thousands of questions for an illustrator to work out. Most importantly, what is the illustration trying to say? What scene does it capture? Who is in the scene? What are they doing? How do they feel? And then there are a myriad of tiny details. For example:

The Hildebrandt brothers initially work out decisions like these in thumbnail sketches, also known as rough sketches. These are quick, small, rough drawings that allow the illustrator to experiment, try different ideas and work out details in a few minutes.

Having worked out the basics in a series of thumbnails, the next step is a rough comprehensive sketch, or in brief, a rough comp. The drawing technique is still quick and rough, normally done in pencil, and it is larger. But the idea is to include all of the elements of the final illustration and see how they all fit together. The rough comp normally goes to the art director who commissioned the work, for his or her approval.