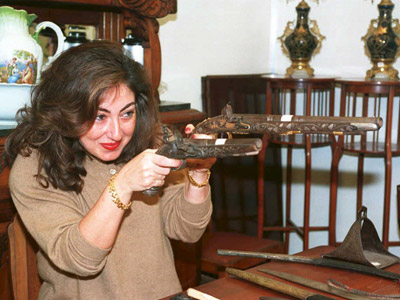 A Lebanese antique dealer examines a pair of 17th century gold and silver studded guns at a flea market that opened in the war-devastated city center of Beirut.
Joseph Barrak/AFP/­Getty Images

­It starts with a passion for antiques. After years of collecting, many people realize that they have more antiques than their home can hold. Or they develop an interest in a different style of antiques. That's when they decide to sell part of their own collection. This small start turns some antique collectors into antiques dealers.

The years of asking questions, buying, repairing, studying and living with antiques are important. Experience counts for antiques dealers. They need to know how to recognize and preserve the value of purchases, properly price their inventory and gauge when particular items will return the most profit. They must also be knowledgeable and networked enough to find the items their clients want. No weekend class can teach that. Successful dealers have often studied under real-world antiques masters, working in someone else's shop, for years.

Antique collecting and dealing often runs in families, passed down from parent to child like blue eyes or curly hair. The respected antiques firm Israel Sack, Inc., continued in business, passing from father to sons to grandson, from 1905 to 2002.

As children, twins Leigh and Leslie Keno learned to value antiques from their grandmother and their parents, who were antiques dealers. When they were 12, they declared themselves antiques dealers and started selling the artifacts they'd gleaned from the countryside around their home. They sold their personal collection of antiques to pay for college. Today, Leigh is a former vice president of the appraisal department at Christie's specializing in acquiring American antiques for prestigious customers. Leslie is Senior Vice President and Senior Specialist of American Furniture and Decorative Arts at Sotheby's in New York. They have made appearances on PBS's "Antiques Roadshow" and hosted the PBS show, "Find!"

Haven't had your fill of old furniture and well-designed pieces? Take a careful look below to see the worth behind those links.