Are 24-hour news channels on their way out? 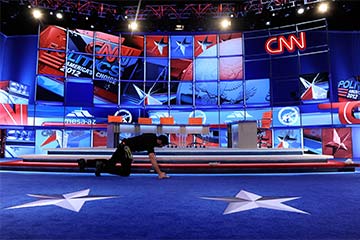 A worker prepares the stage for a debate sponsored by CNN and the Republican Party of Arizona at the Mesa Arts Center, Arizona in 2012.
Ethan Miller/Getty Images

One of the most significant changes in the way that Americans get their news over the past 20 years has been the arrival of the Internet. Print news already seems to be hobbling around on its last legs as its market share is swallowed up by online news sites. But as more and more people begin to rely exclusively on online news sources (and print media continues to barely hang on), do 24-hour news channels still have a role?

In spite of the rise of the Internet, 24-hour news channels still draw a significant number of viewers, and they're not just waiting around and watching in airports. A majority of Americans still cite television as their major source of news. According to a 2013 Gallup Poll, 55 percent of Americans get their news about current events from television. Of that number, 26 percent got their news from non-specific channels; 8 percent went with FOX News and 7 percent with CNN [source: Gallup].

In some ways the competition has been fiercer to grab a slice of the 24-hour news cycle pie. CBS, for instance, launched its own 24-hour news channel in early November 2014, but in the already saturated market of broadcast news channels, it's online only.

So while 24-hour news channels still are juggernauts of the media world, they're going to have to adapt at some point to keep up with the changing market. Dedicated news channels are expensive to run, especially as younger generations become less and less likely to consume news outside of their computers and smartphones. Consumers of the future may also prefer not to subscribe to cable, and instead rely only on streaming information from the Internet.

Viewer demographics are changing as well. In 2002, 80 percent of 18 to 29-year-olds named television as a major news source. In 2010 it was just 52 percent, while the Internet jumped from 23 to 65 percent for the same age group [source: People Press]. Even Americans aged 65 and older are beginning to rely more on the Internet (5 percent in 2007 versus 13 percent in 2010 [source: People Press].

Maybe that's not such a bad thing. The way we watch television is changing, but the demand for instant and constant news is, if anything, intensifying. For one thing, more people, especially young people, are reading their news online, and watching their favorite TV shows online, as well. According to Adobe, whose software runs the platform that most cable companies use for customers to log in to their online services, cable TV viewing over the Internet grew by 388 percent in mid-2014 over the same time during 2013 [source: Wired].