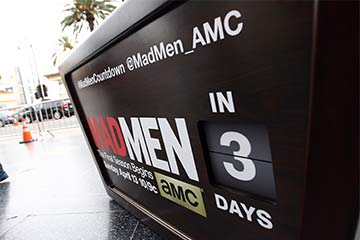 A sign heralds the final season of 'Mad Men' on AMC. Note the hashtag and Twitter handle at the top of the billboard.
Tommaso Boddi/WireImage/Getty Images

AMC, formerly known as American Movie Classics, has hit some homeruns. In fact, pretty much everything the cable channel has released has been a critical success. Two of its first attempts at original programming, "Mad Men" and "Breaking Bad," are regarded as some of the greatest television programs of all time: "Mad Men" has 15 Emmy awards; "Breaking Bad" 16. That's extra impressive when you consider that it was only in 2006 that AMC started to make a concerted effort at producing original programming.

But making quality television does not guarantee an audience (consider the failure of cult classic "Arrested Development"). However, AMC was one of the first networks to recognize the power of social media, and what started as simple, clever hashtags on Twitter and Facebook groups quickly turned into more aggressive styles of engaging directly with viewers.

For instance, fans of "The Walking Dead", another hugely successful AMC hit, discuss the show on "Talking Dead" -- a live talk show hosted by Chris Hardick that airs after every episode of "The Walking Dead." The talk show features members of the cast and crew, plus fans who write in over Twitter and Facebook. It's been paying off too – "The Walking Dead" continues to break cable viewership records, with its fifth season premiere drawing 17.29 million viewers [source: Bibel].

Twitter especially has become one of the biggest social media tools AMC has used to interact with its audience, and its success is even changing the way that Nielsen, which tracks the viewership data that advertisers pay most attention to, rates a show's success. In 2012, Nielsen began rating TV programs, not just in terms of the number of people physically watching them in front of their televisions, but also by checking Twitter to see how many people were talking about the shows they watched.

What Nielsen found was that, on average, the ratio of people who tweet about a given show to people who read the tweets is about 50:1. With numbers like that, a dedicated group of a few thousand loyal fans can reach literally tens of thousands of people. That's a ton of free advertising, and when you've got a loyal, mobilized fan base like AMC does, all it takes is a clever hashtag to generate some sweet buzz.

King of the 'Hill Street' Quiz: How Much Do You Know About TV Icon Steven Bochco?
Why Are Popular TV Shows Splitting Seasons?
Television's 11 Longest-Running Game Shows