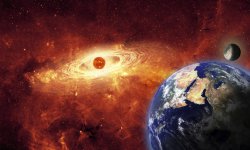 Everybody's day was about to take a turn for the worse ...
iStockphoto/Thinkstock

If there's one thing that crops up again and again as the Achilles' heel of Hollywood writers, it's science. Or, to be clear, accurate science. There's no shortage of go-to ideas for crippling a spaceship, say with a physically impossible conflagration bright enough to burn your retinas and loud enough to shred your eardrums to confetti. And there are also crafty (but still impossible) ways to save that same ship, like by blowing it right past the speed of light or shooting it through a wormhole created with a torpedo and some cinema magic.

For moviegoers, it basically boils down to this: The general population enjoys the spectacle of action-packed scripts. The scientific community wants to see the world in a way that's at least marginally believable, without any huge infractions against the basic rules of physics, math, biology and chemistry.

We can't undo all the factual wrongs in these movies, but we can explain just how preposterous they are in these 10 examples.