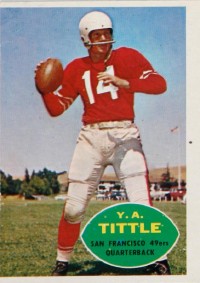 Y.A. Tittle was the quarter-back  for an amazing San Francisco  backfield in the mid-1950s. See more pictures of football.

Yelberton Abraham Tittle -- in an age when quarterbacks are too often judged by how many Super Bowl rings cluster their fingers -- gained enshrinement in the Pro Football Hall of Fame despite never winning an NFL championship. The voters knew he was a winner even if that could not always be said about the teams he directed.

After a fine career at Louisiana State, Tittle (born 1926) spent his first three pro seasons (1948-50) with the Baltimore Colts.

Although his personal statistics were impressive, the Colts were corralled at the bottom of the AAFC and, in their final year (before their rebirth in 1953), proved an embarrassment to the NFL.

Tittle wound up with the San Francisco 49ers -- a giant step up from the Colts -- but also a team stocked with stars and holes, always promising but never quite delivering.

Nicknamed "Colonel Slick" for his clever ball-handling and sharp play-calling, Tittle was said to be the league's best long passer, yet he had "touch" for short passing and a streak of originality.

He and receiver R. C. Owens invented and perfected the "alley-oop" -- a rainbow spiral that dropped from the clouds just as the leaping Owens rose like a rocket to cradle it.

In 1961, the 49ers decided "Yat" was near the end of his road and dealt him to the New York Giants. There, he embarked on his greatest seasons. First, he had to beat out his friend Chuck Conerly, the Giants' quarterback since 1948.

Tittle not only won the starting job but took the Giants to the Eastern Division title. His 2,272 passing yards and 17 touchdown passes earned him league MVP consideration.

Though Tittle's Giants lost three straight championship games, each was to a great team -- two to the Packers of Vince Lombardi and the third to the defensively dominant Bears of 1963.