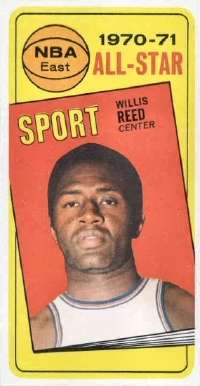 Willis Reed battled Wilt Chamberlain in the most famous game in Knicks history -- Game 7 of the 1970 NBA Finals. See more pictures of basketball.

Willis Reed was the New York Knicks' most popular player when the team won the NBA championships in 1970 and 1973. He was New York's working-class hero, a brawler who led with quiet determination, soft left-handed jump shots, and an occasional forearm shiver. In his first seven seasons, he paced the Knicks in scoring five times and in rebounding six.

In 1970, he became the first player ever named MVP of the regular season, the All-Star Game, and the NBA Finals in the same season. Born June 25, 1942, in rural Hico, Louisiana, Reed began playing basketball as a 6'2" eighth-grader. After enjoying great success in high school, he went to nearby Grambling College, an all-black school famous for its football teams.

Reed averaged 18.7 points and 15.2 rebounds in four seasons and made Little All-America three times. Ignored in the first round of the 1964 draft, Reed launched his professional career with a flourish, winning the Rookie of the Year Award. In his second season, the Knicks acquired center Walt Bellamy, pushing the 6'10", 240-pound Reed to forward, where he stayed three seasons.

In the 1969-1970 season, with Reed back at center and contributing 21.7 points and 13.9 rebounds a game, the Knicks won 60 games and sped through the Eastern Conference playoffs, beating the Baltimore Bullets (Reed had 36 points and 36 rebounds in the last game) and the Milwaukee Bucks.

In the NBA Finals against the Los Angeles Lakers, Reed suffered a thigh injury and the Knicks lost Game 6 by 22 points. But Reed, his body loaded with mepivacaine and cortisone, returned gallantly for Game 7 to score two quick baskets, igniting a runaway Knicks victory. Reed never regained full use of his damaged knees. He endured the 1970-1971 season by taking cortisone injections, then played only 11 games in 1971-1972 after undergoing surgery.

His last hurrah was in the 1973 playoffs, when he neutralized the Lakers' Wilt Chamberlain and won his second Finals MVP Award. Reed retired in 1974 and later coached the Knicks, Creighton University, and the New Jersey Nets. He was elected to the Hall of Fame in 1981.