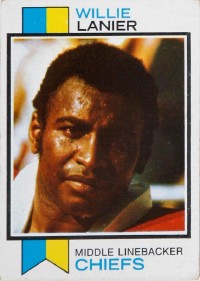 Willie Lanier was the first African-American to star at  middle linebacker, the  "glamor position" of the 4-3 defense. See more pictures of football players.

Willie Lanier was called "Bear" or "Honeybear" by his teammates because he looked like a big, friendly teddy bear.

Willie Lanier, however, was more like a grizzly when it came time to chase down the opposition. He went after ball carriers ferociously, and he defined the middle linebacker position for 11 seasons with the Kansas City Chiefs.

While his hard-hitting style of play earned him instant recognition as a pro, it came with a price tag.

In the seventh game of his rookie season, Lanier (born 1945) suffered a severe concussion after a violent collision with a Denver Broncos ball carrier.

"I was not only afraid my career might be over," he said, "but even worse, that my life might not be normal again."

Fortunately, Willie was able to return to action after missing just four games. From then on, he wore a specially padded helmet and adopted a "careful" approach to his play.

His new approach must have worked, as he missed only one game in the next 10 seasons while accumulating numerous honors. He was All-Pro, All-AFL, or All-AFC every year from 1968-75, and he was selected to the AFL All-Star Game or the Pro Bowl eight times.

One of Lanier's best-remembered defensive stands came in a 1969 AFL playoff game against the New York Jets. The Chiefs were clinging to a 6-3 lead when the Jets got a first down on the Kansas City 1-yard line. Three times the Jets challenged Lanier and three times they failed. The Chiefs went on to win 13-6 and advanced to Super Bowl IV, where they upset the Minnesota Vikings 23-7.

Many have suggested that no one- not even the fabled Dick Butkus- ever played the middle linebacker position better. Ermal Allen of the Dallas Cowboys' research and development department once remarked, "You hear a lot about Dick Butkus and Tommy Nobis, but this Willie Lanier is really the best middle linebacker in pro football."