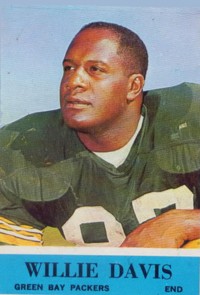 Willie Davis about Super Bowl I: "We weren't playing just for the Packers; we were playing for the entire NFL." See more pictures of famous football players.

A ticket to "Siberia" turned out to be Willie Davis's ticket to stardom.

The Cleveland Browns drafted Davis out of Grambling on the 15th round in 1956. He played a couple of years of Army football before joining Cleveland in 1958.

For two seasons, he was used sometimes at offensive tackle and sometimes at defensive end, but slowly his playing time increased. He seemed to have a future in Cleveland when suddenly he was traded to the Green Bay Packers in 1960.

Cleveland coach Paul Brown had often threatened his players with a trade to longtime doormat Green Bay, then considered the NFL's Siberia. Davis (born 1934) did not know why he was being punished, but for a time he even considered retiring.

But under coach Vince Lombardi, the Packers were about to experience a renaissance. They had managed their first winning season in over a decade in 1959. Davis decided to report.

When he arrived in training camp, coach Lombardi quickly assured him that he had engineered the trade because he needed a top-flight defensive end and he thought Davis could fill the role. "Willie, we have seen some films of you where your reactions are just incredible," Lombardi explained. "We feel with your quickness, you can be a great pass rusher."

Installed as a regular defensive end, Davis was able to use his intelligence, speed, agility, and size (6'3", 245) to become one of the best in the business. He was All-NFL five times and also chosen for a like number of Pro Bowls.

He and Henry Jordan formed the "pass rushing" side of the Packers' outstanding defensive line, while Dave Hanner and Bill Quinlan (later Ron Kostelnik and Lionel Aldridge) concentrated on stopping the run. The Green Bay defense was a major factor in the Packers winning five NFL championships and six division titles in eight seasons. A great team leader, Davis did not miss a single game during his 12-season career.