Why was 'The Day the Clown Cried' never released? 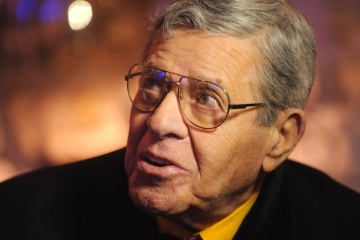 Jerry Lewis is a talented and revered actor, but he's capable of failure like any one else. His unreleased film 'The Day the Clown Dried' might be a testament to that fact.
Brad Barket/Getty Images

Jerry Lewis, it's safe to say, has made a lot of movies in his time -- according to the Internet Movie Database, he's acted or voiced characters in 62 films, written 19 and directed 22 [source: IMDB]. Lewis has had his share of box-office successes and disasters, but perhaps none of his films has created more buzz than the one that's never been released. In fact, Lewis claims that only three people, including himself, have ever seen it.

Speculation, some of it fueled by contradictory statements made by Lewis himself, has run rampant for decades about "The Day the Clown Cried," a 1972 Holocaust film he directed and starred in that has somehow yet to see the light of day. Because it's never been screened and Lewis has basically refused to talk about it, "The Day the Clown Cried" has become the cult movie that no one's ever seen.

Lewis has been notoriously tight-lipped about the film, basically shutting down interviews when the subject comes up. The entire script is available online, though, so there's no mystery about the decidedly unfunny plot. Lewis plays a circus clown who's captured by the Nazis, taken to a concentration camp and forced to entertain children who are about to enter the gas chamber. A few clips, part of a Dutch documentary about the making of the film, suddenly appeared online in 2013, but other than that it's never been seen.

So, what happened? Movie buffs have been wondering about it for years if the film is that horrible? Was 1972 too soon for a Holocaust film? One theory claims that botched finances and feuding producers were reason the project went down the tubes. Others blame the writers for not allowing Lewis to release it. Lewis has seemed to change his story the few times he's reluctantly talked about the movie. In January 2013, he said, "I was ashamed of the work ... It was bad, bad, bad," to a Los Angeles audience. "It could have been wonderful, but I slipped up" [source: CineFamily]. Then in 2009, he told "Entertainment Weekly" that he was proud of the film and might enjoy doing a one-time screening if he could make a few changes to it. And in that same interview he also said the sole copy of the film was locked in a safe and that he'd arranged it legally so that it would never be screened, not even after his death. So it doesn't totally add up. Why doesn't Lewis destroy the film if he's so adamant that no one ever sees it?

The situation doesn't look good for diehard Jerry Lewis fans -- although he's been a little more willing to discuss the movie in recent years, Lewis probably isn't going to unlock that safe. Barring another online leak or a complete change of heart, it doesn't look like we'll be seeing "The Day the Clown Cried" anytime soon.