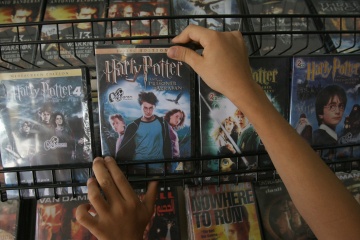 If a film flops on opening weekend, people might decide to wait till it comes out on DVD to see it. We're guessing the producers of the "Harry Potter" franchise didn't worry too much about this problem.
MOHAMMED ABED/AFP/Getty Images

Studios released well over 700 major movies in 2013. This is up from just over 500 films released in 2009 [source: Motion Picture Association of America]. With so many movies competing for box office dollars week after week, the money-making window for each film has shrunk.

Opening weekend ticket sales are a strong predictor of a film's overall financial success. A stellar opening weekend lays a solid foundation for international ticket sales, TV and cable sales and even the DVD and home entertainment markets. A film that flops during its initial release may suffer from a perceived low value for years as it makes its way to various media [source: PBS Frontline].

Beyond the obvious financial benefits, a strong opening weekend affects public perception. Big ticket sales make headlines that create buzz that gets people in theater seats long after opening weekend. After all, a movie that makes $100 million in a single weekend must be pretty fantastic, right? On the other hand, a movie that falls short of estimates right out of the gate may leave the impression that it's better to wait and see the film on cable or DVD rather than pay for a ticket at the theater.

While there's no question that the opening weekend reigns supreme in the eyes of studio executives -- and the media -- a record-shattering release weekend might not be the only path to success in the film industry. Check out the next page to see why the obsession with opening weekend gross might not be so warranted after all.