Browse the article Who made the first animated movie? 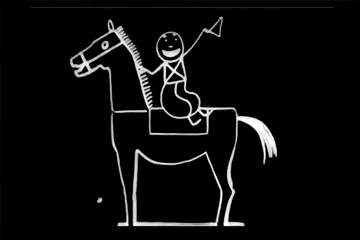 Although the characters in 1908's "Fantasmagorie" look like they are drawn on a chalkboard, they are actually line drawings printed in negative.
Tetra Images/Getty Images

Animated movies can bring an entire fantasy and adventure world to your screen that a traditional film can't. Beloved by adults and children alike, animated movies come in all formats, from Disney-Pixar blockbusters to smaller, independent shorts. The history of animation is rich and fascinating, from its humble beginnings to the digital revolution. Let's take a trip back in time and look at the first animated movie: who made it and how, and what it was about.

Depending on whom you ask, you'll get varying answers about who created the first animated movie. Three people in particular put the first animations on film. Each one built upon his predecessor, so let's look at all three.

In 1888, French scientist Charles-Emile Reynaud invented a device called the Theatre Optique. It could project a strip of pictures onto a screen. Reynaud would paint individual images onto flexible strips of gel (gelatine), with perforations on the edge to run through the projection system. He made three animated shorts to show off his invention. The first was a 12-15 minute feature called "Pauvre Pierrot," which debuted in 1892. Some consider this to be the first animated movie.

Later, in the early 1900s, cartoonist J. Stuart Blackton made the first animated movie shot on standard motion picture film. It was titled "Humorous Phases of Funny Faces," and you can still look it up on YouTube. The film featured chalk drawings of faces moving around, growing hair and blowing cigar smoke. Some say this film is the first animated movie. However, many film historians don't consider it a fully realized animated film.

So what about the third filmmaker? In 1908, a cartoonist and writer named Emile Cohl joined the Gaumont film company as a writer. Inspired by Blackton's animation, Cohl began working on his own animated movie. He worked with drawings, puppets, cutouts and other media as he experimented. Cohl finally settled on line drawings and then put his background as a writer to work. He created a story and a character named Fantoche. The result, "Fantasmagorie," was a unique style of animation, with figures morphing in and out of one another. Although the characters look like they are drawn on a chalkboard, they are actually line drawings printed in negative.

Because "Fantasmagorie" had fully realized characters and was comprised of 700 sheets of paper separately photographed, it's widely considered the first animated movie. Cohl went on to make more than 250 films during his career. You can also watch "Fantasmagorie" on YouTube and shake your head in fascination at the evolution of this cinematic art.