Browse the article What does a showrunner do? 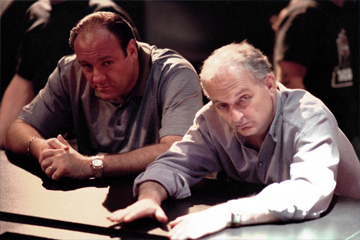 The term 'showrunner' might have evolved as writers gained more authority and autonomy in developing television content.
Getty Images

The doorbell tinkles and mob boss Tony Soprano enters Holsten's diner. Tony, villainous everyman and protagonist of the hit HBO show "The Sopranos," eases himself into a booth. He slips a coin into the tabletop jukebox and cues up Journey's hit song, "Don't Stop Believin'." Pretty soon, his wife Carmela and son A.J. arrive. The camera cuts to his daughter Meadow, who is running late and having trouble parallel parking. Tension mounts. The volume rises on the soundtrack. We see Meadow park her car and race across the street. The doorbell dings. Tony looks up —

The screen goes black. For 10 seconds we hear nothing but silence. Then the credits roll. It was an infuriatingly open-ended way to end such a morally complicated show, and "Sopranos" showrunner David Chase was the person who made that decision.

Creative control, like the kind Chase exercised in ending "The Sopranos," isn't the only responsibility a showrunner has, though it is undoubtedly one of the better perks of the position. In the fall of 2014, a documentary film and a book about showrunning were released. Those interviewed define their experience as showrunners in various ways. Ali LeRoi, showrunner for "Everybody Hates Chris" and "Are We There Yet," says, "You come in wanting to be creative, but you end up directing traffic." Jane Espenson, showrunner for "Caprica"and "Husbands," says that being a showrunner requires toughness and a willingness to offend. Andrew Marlowe, showrunner for "Castle," says, "Being the showrunner means that you're responsible for all the creative and financial aspects of the show" [source: Matheson].

Cindy Hong, blogging for Slate, theorizes that the term evolved as writers gained more authority and autonomy in developing television content. First, she says, writers were endowed with executive production credit. The word "showrunner" grew to differentiate the person with ultimate creative control from a show's other producers [source: Hong].

Having creative authority and having ultimate authority are two different matters, however, as showrunner Joss Whedon discovered when his beloved series "Buffy The Vampire Slayer" was cancelled because, as Whedon put it, the show's broadcast network (WB), "got into a shouting match" over finances with the show's Production Company (20th Century Fox Television) [source: Zalben].

Come to think of it, showrunner Joss Whedon and mob boss Tony Soprano have something in common: They both have authority over a lot of things, but the people holding the purse strings ultimately decide who gets whacked. Unlike "Sopranos" viewers, you won't have to suffer through 10 seconds of silence to learn what happens next. Find lots more television-related content on the next page.