What does 'digitally remastered' mean?

Browse the article What does 'digitally remastered' mean? 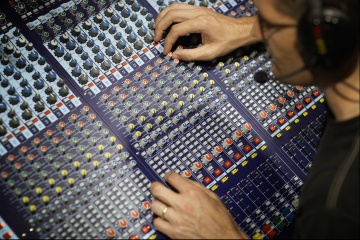 When you love certain musical artists, you hold on to their albums and CDs forever. You might buy every reissue and every version of every album they've ever made. But then suddenly, all their work is rereleased, this time "digitally remastered." But what does digital remastering really mean? Is it worth it to purchase the entire library all over again? Some people say yes; some say no.

Let's look at the technology behind digital remastering, which is different from simply transferring an album from vinyl to CD. When an album is remastered, the process removes any flaws from the recording (bad edits, microphone noises, hiss). The record company promises the consumer a cleaner, sharper and more refined listening experience — music the way it was meant to be heard.

When a sound engineer remasters an album, first he locates the original master tapes. Then he'll adjust or tweak the mix of each song — never the individual tracks of each vocal or instrument, because those are already set in the master tapes. He'll also sweeten up the treble and bass to enrich the overall sound. If the song also has flaws — superfluous sounds that aren't part of the music — he'll remove those. The engineer uses specific digital software for all of this painstaking work.

If you listen to an older song right after a remastered song, you might be able to hear a volume variation — because of differences in recording technologies, newer songs tend to be louder than older songs. And in this age of iPods and MP3s, listeners don't like it when the loudness of their songs doesn't match. So one of the things a sound engineer does is boost the overall loudness of the track, being careful not to push it into distortion. But many audiophiles and music critics complain that everything sounds flat and disturbing to the ear when the loudness is boosted. Sound engineers are quick to point out that it's usually the record companies and artists asking for the remastered songs to be made louder, in order to keep up with current music.

DVDs are remastered in a similar way. Engineers take the original film and transfer it to digital. Then they go through a process of color correction and dust and debris removal. Sound engineers also sweeten the soundtrack, much like remastering an album or CD. Sometimes engineers will change the aspect ratio to make the show or movie widescreen, as opposed to regular television screen size. However, some directors won't change the aspect ratio. David Lynch, for example, insisted on keeping his series "Twin Peaks" in its original aspect ratio to stay true to his original vision [source: Adams].