The Importance of Below-the-line Costs 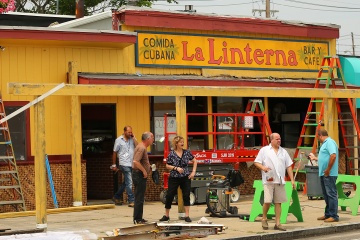 Many states offer filmmakers incentives for bringing business to their local economies, like breaks on below-the-line expenses. Here, a crew has turned a pizza restaurant in Massachusetts into a Cuban cafe.
John Tlumacki/The Boston Globe via Getty Images

So what if you've established your budget, allocating a balanced portion to above and below-the-line expenses, then find yourself facing unexpected costs? Once you get to the filming stage, your above-the-line costs are set, and below-the-line expenses provide the most realistic means of slashing costs and keeping your budget on track. Simple methods of saving may include cutting out expensive scenes, choosing locations that allow free filming or repurposing costumes and props rather than investing in new ones. All these options reduce the overall film budget by lowering below-the-line expenses, and all can be accomplished at virtually any stage of a project.

Below-the-line costs also provide a final, often-overlooked opportunity to trim a film's budget. Many cities and states offer tax incentives to filmmakers to help encourage local filming. Why? Filming a movie is a complex process which requires a great deal of vendors, resources and materials. By bringing film crews to an area, authorities are hoping to spur economic development through job creation and increased demand for local goods and services. What does that have to do with below-the-line expenses? Many of these credits, including ones offered by the states of California and New York, are specifically aimed at covering below-the-line expenses. After all, states realize little local benefit when a well-known celebrity receives another $20 million check, but the benefits of hiring local crews, caterers and other below-the-line personnel can be recognized for months or even years to come.