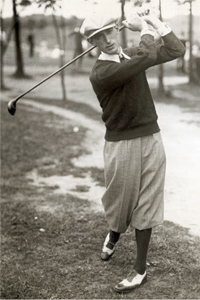 Scottish-American golfer Tommy Armour may have coined the term, but he didn't let the yips derail his career for good.
© Underwood & Underwood/Corbis

For decades — perhaps centuries — athletes have had to battle through the yips. Some have been successful. Tommy Armour for example, won major tournaments despite the yips. Baseball's Steve Sax had a bad case of the yips in 1983 when he played for the Los Angeles Dodgers. He made 30 errors that season. He eventually settled down and became a decent defensive second baseman. Others, however, have not been as lucky. Steve Blass, a hard-throwing right-hander for the Pittsburgh Pirates lost his ability to find the strike zone in 1973, a year after he won 19 games. He left the majors in 1974 [source: Baseball-reference.com].

What can you do if you get a bad case of the yips? Scientists from the Technical University of Munich say squeezing a soft ball or making a fist with your left hand before you pitch or putt could help. Why is that? The German researchers say all of us perform some activities automatically with little thought. Such "muscle memory," along with the left side of our bodies, is controlled by the brain's right hemisphere [source: Collins].

If a golfer concentrates too much on his swing or a baseball player focuses too much on throwing, each stage of the movement becomes disjointed and erratic. That's because the athlete is no longer relying on his muscle memory to complete the task but instead is using the left side of his brain, which controls conscious movement. To strengthen the muscle memory, the Munich researchers theorized that making a fist or squeezing a ball with the left hand would increase the activity of the right side of the brain and allow the muscle memory to work its magic [source: Collins].

Apparently, they were right. Researchers tested their theory on a number of athletes including soccer and badminton players. When the pressure mounted, scientists asked half of the players to squeeze a small ball in their left hands, while other players did the same but with their right hands. Players that squeezed the ball in their right hands did not perform well in the pressure-filled situation, while those that squeezed the ball in their left hands did [source: Collins].

If squeezing a ball might work, what about a wristband? Neuroscientist Robert Goldberg has invented a high-tech band worn around the wrist that measures stress during a round of golf. The information is automatically relayed to an iPhone app, which allows a golfer, or his or her coach, to see how much stress the athlete is under. Goldberg hopes golfers will use the device to understand what triggers stress and devise ways to overcome the problem [source: Cacciola].

Despite such research, the yips remain a mystery, especially to those burdened by them. Cleveland Indian pitcher Chris Perez has seen his share of suffering. In the end, he said, the problem is mental. "They're telling themselves before [the ball is] hit, 'don't throw it in the dirt,'" Perez said in an interview with MLB.com. "And of course, they throw it right in the dirt."

Author's Note: What causes the yips?

For us occasional athletes, the yips are a great excuse for when we miss an easy putt, make an error in softball or roll a bowling ball down the gutter. I have used the explanation hundreds, if not thousands, of times. "I just have a bad a case of the yips," I say. "Blame those involuntary muscle contractions. I'm really not that bad." Sure!