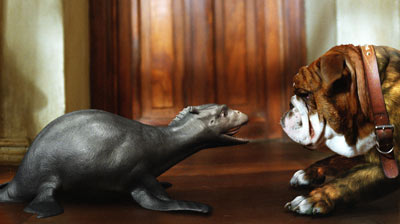 The majority of "The Water Horse" was shot in New Zealand for its proximity to Weta, its film industry infrastructure and experienced crews. The natural settings were also great substitutes for 1940s ­Scotland. The production spent five and a half weeks in the area around Queenstown, New Zealand, whose lack of modern houses and roads made it ideal for a period movie.

"When the clouds come in over the mountains, it could be Scotland," says animation supervisor Richard Frances-Moore. "The only thing missing is that in Scotland, there are old walls and buildings everywhere, so it was valuable to actually go to Scotland to get the representation of the age of the landscape."

"There was no way I was going to make a movie about the Loch Ness monster and not shoot at least part of it in Scotland," says Russell. Visiting Loch Ness for the first time during scouting, he was struck by the masses of tourists staring at and photographing the lake. He soon found himself "hoping that this damn thing would come out of the water. It's that desire in all of us that there's something out there beyond our imagination that we can't explain."

Queenstown's Lake Wakatipu, seen previously in the "Lord of the Rings" movies, was the New Zealand double for Loch Ness. "We didn't have any cover, but we never stopped for the weather," Russell says. "We were incredibly lucky. We had these 70- to 80-mile-an-hour winds every other day, but the crew was so used to it."

Russell, who remained in New Zealand during postproduction to work closely with Weta, says that his first extensive visual effects film won't be his last -- as long as he can work with Weta again. He's not that keen, however, to direct a "Water Horse" sequel. "I feel I've done it," he says. "I've made the film I wanted to make."

For more information about "The Water Horse" and the Loch Ness Monster, check out the links below.

There is no definitive proof, but Adrian Shine believes there's a possibility that something prehistoric lives beneath the surface of the lake.

"[The Loch] is an Ice Age lost world," says Shine, who lives at the lake and has published more than a dozen scientific papers and articles about its ecology. "If … over a thousand people insist they have seen unusual animals, it is within the legacy of the ice that we should seek our candidates.

"The 'water horse' was a diabolical aquatic entity from Highland folklore [that] … preyed upon travelers passing by various lochs," Shine says. "At Loch Ness, the water horse was associated with a 'strange fish' tradition, which we have traced back to 1868. The persistence of the legend is due to its further association, in 1933, with the sea serpent tradition and the Jurassic plesiosaur, a contemporary of the dinosaurs."

"Nessie" sightings peaked in the 1930s, Shine says, because of improved access to the lake. Loch Ness is on a main road, so most visitors to the area pass it in their travels. As for the Loch's -- and the legend's -- continued popularity, it's just human nature.

"We live in a technical society informed by science, yet people we know and trust in our everyday lives report seeing things that science does not seem to confirm," he says. "As science advances, fewer and fewer people understand the questions, let alone the answers. The Loch Ness question is one that everybody can understand, experience and argue about at a personal level. There is an irresistible mystique about the Scottish Highland landscape. If there are no dragons here, there ought to be!"