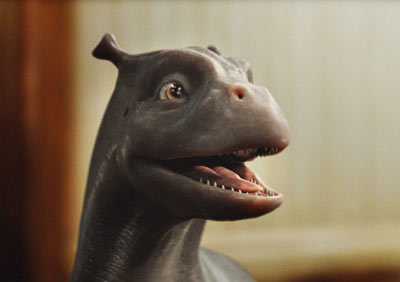 Crusoe's physical design and movement wouldn't have been effective without a consistent personality. "The idea of Crusoe being hungry all the time was something we played with because it allowed us to motivate him. It helped explain why he was always getting into trouble," says visual effects supervisor Joe Letteri. But the designers didn't want to humanize the creature too much

It was a delicate balance, and changes were made even in postproduction. "We made adjustments in the muscles around his eyes and the mouth so we could get those expressions that suggest a personality," says director Jay Russell. "We were tweaking that almost right up until the day we finished the film."

Crusoe's voice is a combination of real animal sounds compiled by sound designer David Whitehead, who recorded animal sounds at a zoo. "The infant sound is a terrier dog, tweaked around and sped up," says Russell. "Once we had the palette of sounds, we manipulated them to fit the personality of the scene."

Pre-visualization animation, a technique that has replaced storyboarding on many films, helped the filmmakers plot the action and develop Crusoe's personality. This was particularly important when Crusoe had to interact with his surroundings -- like water, his bulldog nemesis Churchill, and, of course, young Angus. It was the biggest challenge apart from Crusoe's physical evolution. Meanwhile, stand-ins were devised so the actors had something with which to interact. Alex Etel, who plays Angus, acted with silicon puppets -- and sometimes a tennis ball on a stick. Etel and the bulldog both had digital doubles, too.

The film's many water scenes were a bit tougher for Etel, who took scuba lessons and was submerged in an 8-foot-deep, 4-million-liter tank for a good portion of filming. Shooting in the tank, which was partially surrounded by a 24-foot blue screen, posed a whole new set of challenges and headaches. First up was the issue of how to create a stand-in for Crusoe.

"We had what ended up being a rather clumsy apparatus," Russell says. "You remember those mechanical bulls from 'Urban Cowboy'? We built one of those in blue, shaped like the creature, and put it on a track underneath the water. But [when] we … started to pull it, the drag and weight of the water was so much that it looked like the boy was on a sea turtle, it was so slow. It was a complete disaster."

Then, success. The crew took the head from the bull contraption and attached it to a Jet Ski painted blue, with a driver in a blue wet suit. This provided the motion and splashing needed for the scenes, which allowed Weta Digital to enhance the real water with digital water.

"The water was a huge challenge … We'd done water before, but not like this," says Weta's Richard Frances-Moore. The designers also spent a good amount of time creating digital moonlight for nighttime water scenes.