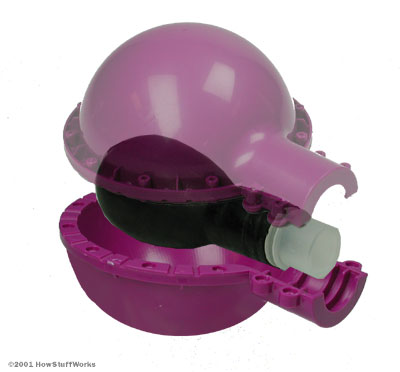 The purpose of the pumping system in a Super Soaker is to compress air. Each time you drive water from the large reservoir into the small reservoir, it pushes up against all of the air inside. Air is a compressible fluid -- you can decrease its volume by squeezing it -- but water is not. When you add more and more water to the small reservoir, it takes up a greater and greater volume. Since there is a limited amount of space in the reservoir, these larger volumes of water compress the air inside the gun so that it has a much higher pressure than the air outside the gun. This cushion of high-pressure air pushes on all of the water in the reservoir; the water presses on the sides of the gun, trying to get outside to restore pressure balance.

The only thing keeping the water inside the gun is the trigger mechanism. The trigger is simply a lever secured to the gun housing. A stiff length of metal attached to the housing holds the top part of this lever against the flexible plastic tube leading to the gun's barrel, pinching it so no water can get through. When you pull the trigger back, the metal piece bends, and the lever releases the plastic tube. With this passageway open, the pressurized air can push all of the water out of the gun, reestablishing a pressure equilibrium with the air outside. If you build up enough pressure, the water is expelled at a very high velocity.

Since each bit of water further compresses the air cushion, the force of the blast depends on how much water you pump into the small reservoir. At a high-enough pressure level, the outward force of the compressed air and pressurized water might exceed the structural integrity of the plumbing in the gun, causing it to leak. To prevent this from happening, the trigger mechanism is designed to let some water through when the pressure reaches a certain level. This "leak level" is determined by the strength of the metal that holds the trigger down. Essentially, this piece of metal is like an ordinary spring, and its springiness is determined by its composition. If the metal is more rigid, it will take a higher water-pressure level to push it out of the way. If you have a more flexible piece, the gun will let some water leak at a lower pressure.

In the late 1990s, a new wave of Super Soaker guns came out that boasted higher pressure levels. These guns, developed by Bruce D'Andrade, feature the Constant Pressure System, or CPS. The main component in this system is a simple water bladder. This bladder is like a balloon, but it is made of much more rigid material. These guns have the same sort of pump as other Super Soakers, but the water and air are driven into the water bladder rather than into a plastic reservoir. As you pump more water in, the bladder expands, in the same way a balloon expands as you blow more air into it. When it is stretched, the bladder wants to return to its natural shape, so it applies a good deal of inward pressure on the water. When you pull the trigger and open up the passageway to the gun barrel, this pressure drives all of the water out of the gun. This allows for much more powerful water blasts than can be achieved with compressed air alone.

Some of the Super Soakers in the 2001 line Click on each picture to see a larger image.
Photo courtesy Larami Ltd.

These are just two sorts of pump-based water guns. Lonnie Johnson and Bruce D'Andrade's first Super Soaker and the later addition of the water bladder have launched an entire line of water weapons. For extra ammunition, some designs hook up to a huge water reservoir that you wear like a backpack. Other guns are configured so you can shoot forward, backward and sideways at once. This has altered the world of water guns drastically. In the past, kids knew exactly what to expect when they went to the toy store for a new water gun. These days, the shelves are stocked with a wide range of new designs every summer. Unless you've been to the toy store recently, you have no idea what your neighbors might bring to the next big water fight.

For lots more information on water blasters and related topics, check out the links below.