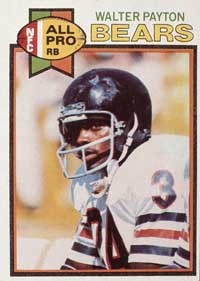 Walter Payton, the NFL's all-time leading rusher, was arguably the best running back to play the game. "When Walter went down the assembly line," a Chicago Bears assistant coach once remarked, "everything was a chrome-plated part."

A remarkable athlete, Payton (born 1954) didn't play organized football until his junior year at Columbia (Mississippi) High School. But he ran 65 yards for a touchdown on his first carry and scored on a 75-yard play later the same game.

Recruited by several major colleges, he chose Jackson State so that he could play in the same backfield as his brother Eddie.

At Jackson State, Walter rushed for 3,563 yards in four seasons and scored 464 points. It was there that he earned the nickname "Sweetness," because of his smooth running style.

For 13 seasons with the Bears, Payton mesmerized observers with his spectacular play. He had the speed to run outside plus the power to drive up the middle.

Exceptionally durable, he missed only one game in his rookie season and then played in 186 consecutive games. His astonishing durability helped him establish NFL records for carries (3,838), yards gained (16,726), and rushing touchdowns (110).

A complete football player, he was a devastating blocker and caught 492 passes for 4,538 yards and 15 touchdowns. His best single-game performance occurred on November 20, 1977, when he rushed for 275 yards against the Minnesota Vikings. That same season, he ran for a career-best 1,852 yards.

A punishing runner, Payton rarely ran out of bounds. He explained: "My coach at Jackson State, Bob Hill, always said that if you are going to die, you should die hard, never die easy."

Despite all the attention and honors bestowed upon him during his extraordinary career, Payton always maintained a healthy perspective. Upon learning of his election to the Hall of Fame in 1993, he humbly remarked, "I'm thrilled but embarrassed. I got paid for playing a kid's game, and I enjoyed it."

Just six years after his enshrinement, Payton contracted a rare liver disease that rapidly turned cancerous. On November 1, 1999, one of the toughest and most complete football players the world had ever known passed away at age 45.