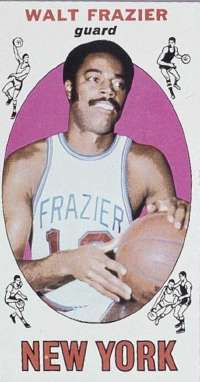 Walt "Clyde" Frazier, the preeminent defensive guard of his era, wrote his ticket to the Hall of Fame when he led the New York Knickerbockers to a pair of championships in the early 1970s. Frazier holds the Knicks' career record for assists, and he was the leading scorer in franchise history until Patrick Ewing passed him in 1993-94.

The oldest of nine children, Frazier learned to keep a level head at an early age. His calm demeanor served him well on the basketball court, where his easy, self-assured style was often mistaken for nonchalance. He was a great clutch shooter. When the ball was in Frazier's hands, something good usually happened. He ran the show. "It's Clyde's ball," teammate Willis Reed once said. "He lets the rest of us play with it sometimes."

On defense, Frazier stole the ball with impunity. It was said that he was so quick, he could pilfer the hubcaps off a moving car. One opponent described his hands as "quicker than a lizard's tongue." Perhaps the only thing that kept him from leading the league in steals is that the statistic wasn't kept during the first half of his career.

Frazier was one of New York City's most popular and visible personalities. Given to stylish excesses, he owned a Rolls Royce, a pink Eldorado called "the Clydemobile," a posh bachelor pad on Manhattan's East Side, and a wardrobe of the latest fashions. His muttonchop sideburns were state of the art. He was nicknamed Clyde after notorious bank robber Clyde Barrow. Dressing like a 1930s gangster, Frazier donned wide-brimmed hats and fur coats. Esquire magazine featured him on its cover as one of "The 10 Best-Dressed Jocks."

A standout in two sports at David Howard High School in Atlanta, Frazier (born March 29, 1945) turned down football scholarship offers from the University of Kansas and Indiana University to attend Southern Illinois University on a basketball scholarship. He ex­celled as a sophomore at SIU, averaging 17.1 points and 9.2 rebounds per game, but poor grades cost him his eligibility for the 1965-66 season. He was allowed to practice with the team, but only on defense. The next season, he averaged 18.2 points a game and led the Salukis to the championship of the prestigious National Invitation Tournament at Madison Square Garden.

When Frazier joined the Knicks as a first-round draft choice in 1967, they had not won a championship in their 21 years in the NBA. The Knicks had talented players such as Reed and Walt Bellamy, but they needed a leader. Frazier filled that role brilliantly. In his second season, 1968-69, he set a franchise record for assists. As he grew as a player, the Knicks grew as a team, finally capturing the championship in 1970.

In 1971, the Knicks traded for guard Earl Monroe, a rumored precursor to a deal sending Frazier to Houston for Elvin Hayes. That trade never materialized, yet there was speculation about whether Clyde and "Earl the Pearl" could coexist in the same backcourt. Doubts were put to rest when the Knicks advanced to the NBA Finals in 1972 and won their second championship the next season.

Frazier scored a career-high 23.2 points per game during the 1971-72 season, and he was a 20-per-game scorer throughout the heart of his career. A strong rebounder from the backcourt, Clyde frequently tallied triple-doubles. Virtually all of his numbers improved come playoff time.

After the 1976-77 season, in which his scoring average dropped to 17.4, Frazier was sent to the Cleveland Cavaliers as compensation for free agent Jim Cleamons. Clyde retired in 1979. In addition to averaging 18.9 points and 6.1 assists during his 13-year career, he had made the NBA All-Defensive Team seven consecutive seasons beginning in 1969. No other guard can make that claim. Frazier was inducted into the Hall of Fame in 1987, joining four teammates from the 1973 championship team: Reed, Jerry Lucas, Bill Bradley, and Dave DeBusschere.

Reed returned for Game 7, but he was ineffective. Frazier, on the other hand, was spectacular. In addition to his 36 points and seven rebounds, Frazier passed for 19 assists. He scored 23 points in the first half as the Knicks raced to an insurmountable lead. Final score: Knicks 113, Lakers 99.