A Galaxy of Possibilities 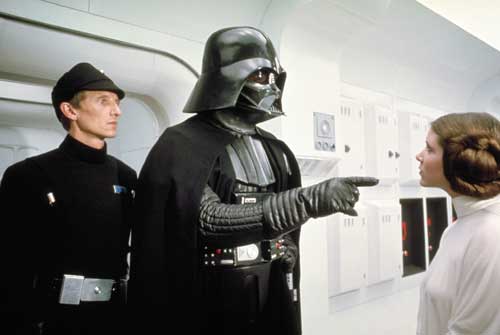 Despite the adversity, injury and betrayal, Darth Vader rose to the top of the Empire as the Emperor's right-hand-man. Vader successfully exposed Imperial Senator Leia Organa as a traitor and captured her as she attempted to bring the stolen Death Star plans to the Rebellion.

Again Vader faced his old master Obi Wan, but this time it was Vader who was victorious. He killed Kenobi and was the only survivor of the Rebels' terrorist attack on the Death Star. Many brave Imperial men died that day, but Vader dedicated his life to avenging their deaths.

In an effort to fulfill his sworn vengeance, Lord Vader led a successful campaign to find the Rebels' hidden base. He destroyed it in the Battle of Hoth. Vader managed to captured the Rebel terrorists Han Solo, Chewbacca, and Princess Leia as they fled the battle. He successfully neutralized Rebel Captain Solo in an ingenious way -- freezing Solo in carbonite. The other Rebels did escape, however, when the spineless Lando Calrissian betrayed Vader to aid them.

Edwards: And now Lord Vader one last person from your past -- a very special guest.

Guest: Lord Vader I remember when you brilliantly devised a plan to freeze the rebel scum, Han Solo.

Edwards: Do you know who this is?

Guest: My Lord, I was in the carbon freezing chamber with you as we plunged the criminal into the swirling gas.

Vader: There were several people in the room that day.

Guest: I was standing behind you.

Guest: ...behind you and a little to the left.

Vader: Sorry... I got nothing.

Guest: Oh! You did try to choke me once.

Vader: And yet you still live?

Guest: You got distracted. I think an important fax came in.

Edwards: Just come out from behind the screen already.