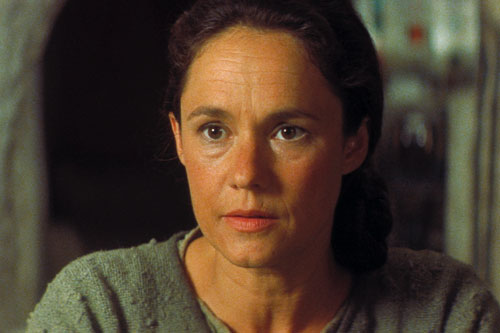 Even as Anakin and Amidala's love blossomed, there were dark storm clouds gathering. Haunted by terrible nightmares of his mother, Anakin decided to return to his home-world of Tatooine to rescue his mother from a life of slavery. Once he arrived, he met his mother's new husband Cliegg Lars and his step brother Owen Lars. He also learned that his mother had been taken by Sand People.

Intent on rescuing her, the brave young Jedi went to find his mother. Sadly, he learned his mother had been tortured and mortally wounded by the savage Tusken raiders. Overwrought with grief, Anakin slaughtered the animals -- every last man, woman and child.

Later Anakin faced the Jedi traitor Count Dooku in the first battle of the Clone Wars. Dooku bested him and the encounter cost Anakin his arm. Later, when he took Amidala's hand as his bride in a secret wedding on Naboo, he did so with a cybernetic replacement arm.

In the following months, Anakin became a legend in the galaxy as he and Obi Wan beat back the advances of the Separatist army. But despite the accolades, Anakin suffered during this time as he was often separated from his wife for months at a time. It was also during this time that Anakin grew closer to Chancellor Palpatine. Palpatine began to teach Anakin about the true power of the Force. This closeness, and the contradictory teachings Anakin received from Palpatine, caused an ever growing rift between Anakin and his master, Obi Wan.

As a young man Anakin was already a legend.
Photo courtesy © Lucasfilm Ltd. & TM. All Rights Reserved.Digital work by ILM

In the tumultuous times when the Republic was dissolving to make way for Palpatine's Empire, Anakin finally found the true source of his power -- anger, fear and hatred. Taking his rightful place by Emperor Palpatine's side, Anakin shed his former identity and his allegiance to the Jedi council and took his true name, Darth Vader, Dark Lord of the Sith.

Darth Vader was eventually betrayed by his former master, Obi Wan Kenobi -- leading to an epic showdown between the old friends. Despite Vader's power, Obi Wan defeated him, grievously wounding Vader and leaving him for dead.

It was Vader's anger that kept him alive. Eventually his broken body was restored through a series of operations. Now outfitted with cybernetics and a respirator system, Darth Vader took the form we have all come to know and love.