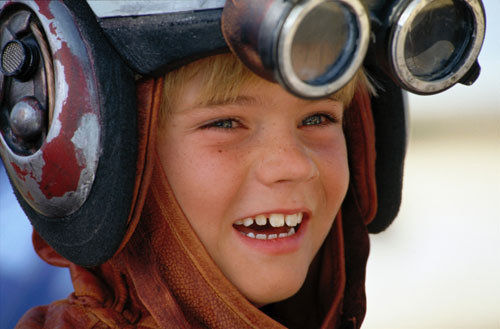 Darth Vader, Dark Lord of the Sith wasn't always the larger-than-life black-hand-of-death that we've all come to know and love. Lord Vader's story starts on the desolate and dusty rim world of Tatooine. Born into slavery under the name Anakin Skywalker, young Vader was the son of a kind slave woman named Shimi Skywalker. Never having a father to look up to, Anakin -- or Ani as his friends called him, grew up quickly on the streets of the rough trading town, Mos Espa. Showing a preternatural adeptness for electronics and piloting, Anakin built his own pod racer from mere scraps -- parts hoarded from his master Watto's junkyard. The only human ever known to successfully pilot a pod racer, Ani was only nine years old when he took first prize at the Boonta Eve Classic.

Eventually, Anakin was whisked away from Tatooine by maverick Jedi, Qui Gon Jinn and taken to Coruscant where, after much convincing, he was finally accepted by the Jedi Council and trained by Jedi Knight, Obi Wan Kenobi.

Edwards: And now Lord Vader a special guest from your past.

Guest: I remember as a young boy Anakin was quite precocious and intelligent. He was one of the few humans who could speak the language of just about anyone who rolled through Mos Espa. He once outwitted me in negotiations for a thermal coupling. I was haggling with Anakin in my native tongue of Dug claiming I only had 30 Republic Credits to my name. But during the deal I was bragging in Twi'lek to my pit boss. I was going on about the 80 Rupees I had in my back pocket and how I was going to rip off this stupid leg walker by convincing him he could exchange his credits for Rupees at the local cantina.

Edwards: Lord Vader, do you remember this voice from your past?

Guest: Do you remember the Boonta Eve Classic? That was the first time you ever beat me in a pod race. I really couldn't believe it -- considering that I sabotaged your pod. I tore out the thermal coupling. I thought there was a nice touch of irony in that.

At this point Vader stood up and said, "Sebulba! You dirty Dug!" Sebulba came out from behind the screen and the two old rivals shared a warm hug.