The Call to Duty 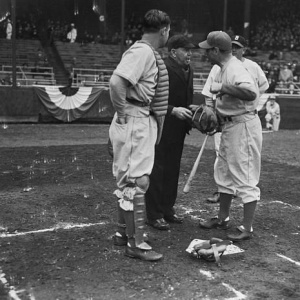 Umps have been getting business for decades. Here, Leo Durocher, player-manager of the Brooklyn Dodgers, argues with legendary umpire Bill Klem, center, about a call. In this picture, Klem had just begun his 36th year of arbitrating.
© Bettmann/Corbis

"If you're liked by the coaches and players, you had it made. You had to do a good job to be liked. If they didn't like you, you might have been in for a hard time." Uncle Gil rarely had a hard time when he reminisced about his life calling balls and strikes to a local newspaper reporter nearly 40 years ago. For decades, Gil Lee umpired many a game in a grimy, upstate New York burg.

To me, Uncle Gil was always the quintessential baseball warrior, marching off to combat with a king-sized chest protector and steel mask, ready to battle those who would sully the purity of the game with things like spitballs (when the pitcher puts a foreign substance on the ball, like spit) and phantom tags (when the umpire mistakenly thinks a fielder tagged a runner). I learned many things about the game from Uncle Gil, although I refused to follow him behind the plate. (I got enough grief at home and school.) The main thing he taught me is that if an umpire doesn't love the game, he wouldn't do a good job. (Note: There weren't any female umpires in Uncle Gil's day, but women can apply to umpire school. As of July 2013, the major leagues still hadn't seen a female umpire officiate a game though.)

Umpires came to baseball seemingly as an afterthought in the 19th century. Their main task was to make sure that teams didn't cheat. Back in the day, a baseball team was only as good as how well its players swindled their opponents. Fielders often pushed runners off base then tagged them out. Runners ran straight from first to third without touching second base. The umps put a stop to such tomfoolery. The methodical cheating subsided, and the umpires remained. One umpire — chosen by the home team — morphed into three by the 1930s. Today's regular-season, big league umpiring crews have four members [source: Keri].

As the official arbiters of the game, umpires have the following responsibilities: