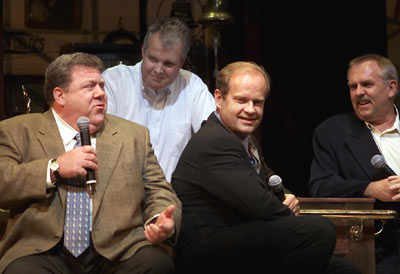 Once the pilot is shot and edited, it goes back to the network execs for review and any final edits or changes are made. Now the network must decide which shows to air, which to shelve for possible later use and which to dump altogether. The percentage of shows that get picked up for the fall lineup varies from network to network. A recent Variety article stated that during development season "a broadcast network will buy 25 comedy scripts, shoot 12 of them as pilots and pick up two of the 12 for series." That same article also asserted that a cable network will "develop three sitcom scripts, shoot two pilots and go into series production with the better one." Based on that scenario, the percentages are pretty high with the cable network, provided you're one of the three with an accepted pitch and purchased script.

This brings us to the end of pilot season. Pilot season always closes with the all-important upfronts. This is when the network execs gather in New York to premiere their slates of fall shows for advertisers. The name comes from the process of advertisers buying ad time "up front" based on the perceived success of the fall lineup.

So, here we are in the fall lineup, which means the show has been picked up and slated for a series run of 13 episodes. A full season is usually 22 episodes. Back in the early days of television, a full season was at least 42 episodes. If it was an hour-long show, each episode ran for 50 minutes, with 10 minutes of advertising. Today, hour-long episodes are only 44 minutes long.

The success of a new show can be measured in several ways -- placement in the lineup, advertising, buzz, critical review -- but it is really the Nielsen ratings that make or break it. You can find the full list of weekly ratings in Hollywood Reporter or go to nielsenmedia.com for a list of the current top 10 shows. If the Nielsen ratings are good, the season can be extended and/or a second season set. If the ratings are bad, the network will often pull the show and substitute a midseason replacement.

Every network hopes the show will be a multiple-season hit. Any TV show that reaches 100 episodes is eligible for syndication. In syndication, the rights to the show are sold to another network or, in some cases, retooled for the same network, allowing the series to be shown outside of the current or regularly scheduled time slot.

One way to assure a continuation is to do well during sweeps week. For this week in May, all episodes are new, full of hooks, twists and big plotlines in an effort to get ratings up.

Ultimately, if a show fails, it doesn't mean the show is necessarily over, so to speak. In most cases, a writer or show creator will turn to plan B and start the process all over again. A fine example of this is film director Barry Sonnenfeld. He has had four series canceled since 1998: "Fantasy Island" (no, not that one), "Maximum Bob­," "Secret Agent Man" and "The Tick." But now he's back with "Pushing Daisies," one of the most talked-about shows for fall 2007.

To learn more about TV production, check out the links below.­

Can a show work without writers?

In a word, no. In November 2007, the Writers Guild of America -- more than 10,000 TV and film writers -- went on strike for the first time in 20 years. Most observers are expecting the strike to be a long one, so the studios have been operating in crisis mode for months, amassing scripts to avoid a total disruption of production. For the most part, current shows should be on schedule through the end of the season, but it's entirely possible that the fall 2008 season will be delayed. For the purposes of this article, we'll pretend it's business as usual, but if you're really hoping to sell a script, you'll want to pay close attention to the strike negotiations.