Do TV actors get paid in royalties?

Browse the article Do TV actors get paid in royalties? 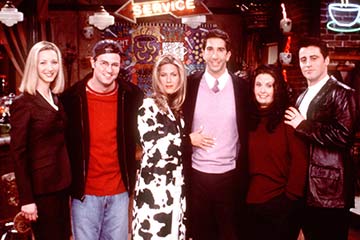 The cast of "Friends" is probably doing very well on the residuals front.
Getty Images

A royalties payment is usually a percent of the revenues made on the use or sale of a copyrighted work of art, like a song, play or novel. For instance, it's common for authors to earn royalties on books they write, but actors typically don't get paid royalties for TV shows they work on.

Instead, after the initial release of a TV show or movie, and once the actor has received his or her payment (however it was negotiated) they will continue to be paid in what are called residuals for as long as the product is still generating revenue. That means the actor (or their estate) is still entitled to some part of the licensing fee that broadcasters pay every time a show or movie is aired on TV.

The actual amount that a Screen Actor's Guild member makes in residuals is the result of a combination of factors, including how long production lasted, the actor's contract, and the medium -- DVD sales, cable TV, film and regular television all pay different percentages of the licensing fees. However, the one thing they all have in common is that unless the actor negotiated a healthy percentage of the gross receipts, the amount he or she will receive in residuals continues to depreciate every time the program airs.

For instance, it's well-known that each cast member of the '90s show "Friends" eventually negotiated a salary of $1 million per episode. However, the cap for a first repeat on TV was $2,500 in the '90s. Once the show got syndicated, the first check for the first airing dropped to 40 percent of $2,500; this number decreased with each repeat until the 13th showing, when the percentage is fixed at 5 percent indefinitely. Foreign rights and DVD sales are calculated differently. Financial radio show Marketplace estimated that Lisa Kudrow earned at least $2,360,000 in residuals for "Friends" and probably a lot more.

What about a deep cable airing of, say, a "Punky Brewster" show? It probably generates somewhere between $1 and $2 for lead actress Soleil Moon Frye. Licensing fees decrease as media properties age, so most residuals checks bottom out shockingly low -- there's even a bar in Studio City, California that will swap a free drink for a residual check if it's less than a dollar.

On the other hand, when a movie or TV show has a lasting audience and continues to make money, even minor actors can make a decent living just from residuals checks. One notable example is "The Shawshank Redemption," which didn't make much money in theaters when it was initially released in 1994 but is now considered a modern classic and still accounts for about 151 hours of airtime on cable every year (that's about $1.5 billion in licensing fees alone). The movie also has earned an additional $2.2 billion on video and DVD sales [source: Adams].

Bob Gunton, who had the relatively minor role as the warden, reports that his residual checks were near six figures in 2004 when the film itself was 10 years old, and continues to pay out even in 2014 [source: Adams]. Not bad for a supporting player.