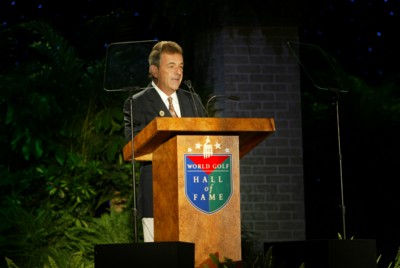 At two different times in his life, Tony Jacklin emerged as the man who restored pride to golfers on the eastern side of the Atlantic.

Born in Scunthorpe, England, Jacklin turned pro in 1961 at age 17. He became a strong force in 1967, winning two events in Britain and finishing fifth in the British Open. The next year, he came to America to play the PGA Tour and won the Greater Jacksonville Open, the first U.S. Tour victory by a British-based player since Ted Ray won the 1920 U.S. Open.

In 1969, Jacklin became a British hero by winning the British Open at Royal Lytham and St. Annes, beating Bob Charles by two strokes. Jacklin's performance in the 1970 U.S. Open was even more impressive; his seven-stroke victory margin at Hazeltine National was the largest since 1921.

Jacklin finished fifth, third, and third in the next three British Opens, but, thereafter, was never a factor in the major championships.

Some think the 1972 British Open was a fatal blow. He seemed primed to win there before a reversal of fortune at the 71st hole. Tied for the lead with Lee Trevino, Jacklin watched Trevino chip in for a par and then three-putted from 15 feet for a bogey.

Jacklin won once more in the U.S., in 1974, and became less of a factor on the European Tour as the decade wore on.

Jacklin, an outspoken and confident sort, found a new role in the 1980s as captain of the European Ryder Cup team. Working with a strong nucleus of players, he instilled a belief that the Europeans could beat the mighty U.S., and, after coming close in 1983, they accomplished the trick in 1985 and 1987.