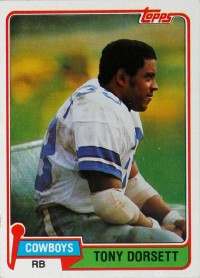 In 1977, the Dallas Cowboys surrendered a first-round draft pick and three second-round picks to the Seattle Seahawks just for the right to draft Tony Dorsett.

"We've never had a player who demonstrated so much ability in college," remarked pleased Cowboys coach Tom Landry.

Dorsett (born 1954), the 1976 Heisman Trophy winner from the University of Pittsburgh, was a collegiate star of unparalleled proportions. He broke or tied 14 NCAA records and was the first player in history with four 1,000-yard seasons and three 1,500-yard seasons.

A four-time All-American, he rushed for an NCAA career-record 6,082 yards and scored 59 touchdowns. His outstanding play led the Panthers to the 1976 national championship with a 12-0 record.

Equally effective as a professional, the 511", 184-pound back became the first NFL player ever to gain more than 1,000 yards in each of his first five seasons. He broke the 1,000-yard barrier eight times in nine years, missing only in the strike-shortened 1982 season. The most electrifying runner in Cowboys history, Dorsett was an integral part of the Cowboys' tremendous success during the late 1970s and the 1980s.

Every time the smooth-running Dorsett touched the ball, opponents feared the worst. When Tony rushed for 100 yards in a game, which he did 46 times for the Cowboys, they won 42.

He even managed a record 99-yard touchdown run on a broken play in a 1983 contest against the Minnesota Vikings. It happened on a play that called for the Cowboys' other running back, Ron Springs, to get the ball. Misunderstanding the call, Springs left the huddle and returned to the sidelines, leaving the Cowboys with only 10 men on the field. The quick-thinking Dorsett "improvised" and turned the broken play into a record touchdown run.

Dorsett played for the Cowboys for 11 seasons before finishing his brilliant career with the Denver Broncos. During that time, the 1994 Hall of Famer rushed for 12,739 yards, which ranks him third all time behind only Walter Payton and Eric Dickerson.